Two inputs made me notice the new BBC podcast Thinking Allowed (feed). For one, at the end of each issue of BBC's In Our Time, ever since the new season started, there was a promo for Thinking Allowed (thinking aloud, I thought for a moment). Then, secondly, one of my readers alerted me to the podcast. And so I took on my first episode about Male Immaturity among others. 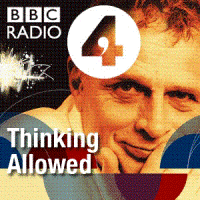 Well, if thinking is allowed, I took the liberty of doing so, and did not stop pondering Male Immaturity for a long time after finishing the show. The, relatively short, studio discussion with Gary Cross and Michael Bywater had a near fatal flaw in it. I found the explanation for the new boyish nature of men completely unconvincing and I doubt whether anything can be helped by initiation rites. Bar Mitzvahs for us all? However, the creeping notion that the immaturity might be a problem, not just a phenomenon to describe, stuck. And also, the connection with female immaturity, the child woman, Kindfrau, kindvrouwtje, as an entity that has a much longer history was necessary and possibly revealing.

So here is a tip of my thoughts. I think immaturity can partly be explained by prosperity. In a world of wealth man (or woman) doesn't have to take responsibility and can just enjoy all play and no work. Spoiled, childish, useless princes and princesses of wealth have also always been part of the landscape. The width of the male immaturity is new. And the fact that women are not staying immature to the same extent. So in addition to wealth and certainty, I add the technological, urban society. If men were hunters and women were homemakers, the hunting grounds in the modern western world have gone extinct and the metropolis is a huge home (note metropolis means mother-city). Women are better equipped for modern society and men have to change, acquire whole new skills way beyond the game of hunting or stay boys. In a nutshell.

More BBC:
In Our Time,
Pods and Blogs,
BBC History Magazine,
From Our Own Correspondent.