Sour soup with fennel and garlic 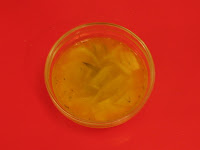 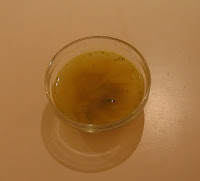 Clean the fennels (keep the green leafage aside) and cut to fine pieces. Put one table spoon of olive oil in the pan on low heat and add the turmeric and the cumin. Stir fry for two minutes and add the fennel. Stir fry for ten minutes, while gradually increasing heat (make sure neither the spices nor the fennel gets burned). Add ample salt and boiling water (3 to 4 liters). Then add the garlic. Cook for 15 minutes and then add the juice of two lemons. Cook on low heat for another two minutes, add the leafage of the fennel and allow standing time. Add salt and pepper for taste.
Posted by Unknown at 13:22 0 comments

If you do not know how to deal with aubergine, it is a really terrible vegetable. It can be a tasteless sponge that makes your dish heavy and even make some people ill, whether it is because of allergy or otherwise. It can be a nightmare while preparing dinner. The green of the plant is like a nasty thistle that hurts your fingers and leaves the sensation of having touched a cactus. Throw in the aubergine too late and the whole dish is ready to serve except for the aubergine that is bitter and rubbery. Cast it in too early and the sponge takes in all the fluids messing up the stew for other ingredients. Over the years, I have begun to learn to get the eggplant under control, and I am still learning.
If you peel the aubergine, cut it in strips and cook it with lemon and tahin, you can get a soup that competes with a creamy soup of asparagus -- I am still trying to get that recipe right. I am also perfecting a dish with minced meat and a red sauce. My wife has some good results with softening the cubed eggplant in the microwave. So there is lots to come.

The easiest way to begin getting the aubergine right is by using the oven or the grill. Without additions, aubergine at high temperatures, turns soft, liquid even, if given enough time. The flavor is sharp and pleasantly scorched. The softened eggplant makes for an excellent basis of pastes, sauces and stews. I'll give two of them here.

Take an aubergine and cut it lengthwise in half. Cover the halves with tinfoil and burn them at 200 degrees for about an hour. (This depends on the power of the oven and the size and toughness of the plants. Large and tough needs more time and power.) After this treatment, you can scoop the liquid out of the peel. Mix it with garlic, a little tahin, lemon and pepper for a traditional middle-eastern side dish. Last night though I made two other side dishes.

Me and Physics; don't make me laugh. I dropped out of Physics class in high school (3 atheneum). I can't even get Newton's equations right. Forget about General Relativity. What could I possibly make of gravitational waves? I am a man for History, languages, Law, in case you hadn't noticed. It just so happens that Law brought me to Sociology and Sociology to Logic of Science and once there, you roll from Popper to Einstein and back to Physics with renewed interest. Interest is one thing, but how in the world am I going to grasp all that if I couldn't keep up, right from the start?

In our time, comes to the rescue. Melvyn Bragg met with Jim Al-Khalili, Professor of Physics at the University of Surrey, with Carolin Crawford, Royal Society Research Fellow at the Institute of Astronomy, Cambridge and with Sheila Rowan, Professor in Experimental Physics in the Department of Physics and Astronomy at the University of Glasgow and they sorted it all out for me. I am not going to try to reproduce anything of their discussion here, no need to get audacious, but believe me, I didn't miss a second. This podcast is one of the very, very best there is.
Posted by Unknown at 10:36 0 comments

Links to this post
Labels: BBC, English, In Our Time, podcast, review, science

Schug is a spicey additive that has its roots in Yemen. You can mix it with sauces, salads and soups. My father-in-law used to make it at home after learning the recipe from a Yemenite Jew colleague of his. I asked him on occasion how he made it, but it was only several years after he passed away that I set out to reconstruct the recipe. Today I make a schug that is different from what I recall was his, but has developed in the direction my wife and I like it best. 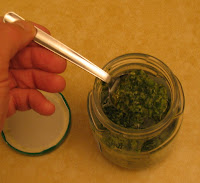 Every time I take the ingredients in different proportions. It really depends on the season and what I know of the quality, strength of taste, in the ingredients. Right now, because the warm season has started, I use more salt and oil to prevent early molding.
Clean four green peppers: cut off the top and bottom, throw away the seeds and cut them in easy to chop pieces and throw in a blender. Add one tea spoon of salt, one tea spoon ground cardamom, one tea spoon ground cumin and half a tea spoon fine ground black pepper and a spoon oil. Blend. Add a handful of cilantro leaves (100-200 gram) and seven cloves of garlic. Blend until the whole becomes a green paste. Add more oil and the juice of one lemon. Blend for five minutes.
Posted by Unknown at 10:13 0 comments

Podcasts are my means to perceive the world. On whatever subject I like to achieve more understanding, I look for a podcast. The KMTT podcast is among a handful, I follow for enhancing my knowledge about Judaism, be it religious, be it secular. KMTT was recommended to me by a religious acquaintance. He himself listens to the Hebrew version, which I haven't tried yet.
I listen to the English version, but not to all issues. I have a lack of interest in halachic matters, so I pass these over. What I pick are the theme episodes on Jewish thought and philosophy and the ones on the weekly Torah readings, parshot hashavua.

This week's parasha is parshat bemidbar and as usual I had a hard time following the whole lecture. No matter how much I like to see myself as a Jew, a secular one for that matter, in these traditional settings I feel like an anthropologist and a newbie at that. Alternately I feel, the way I felt in my first years at Law School when University Studies and Legal Thinking still eluded me. An inapt and scrambling outsider.

Nevertheless, I did pick something up. One of the things that is mentioned in parshat bemidbar is the special place the tribe of Levi has among the Israelites. The lecturer (Rabbi Yonatan Snowbell) discusses what meanings and sense this place, aides to the caste of priests, the cohanim, has. There seems to be a connection with the role the Levites fulfilled when the sin of the golden calf took place. They were the only ones who did not sin and they were appointed the task to kill those who did. (And some 3000 were killed, good old bloody Bible.) Then the task of aiding the cohen was taken away from the original appointee and given to the Levites.
Fine, but this raises a question of how this is justified. Is it because they did not sin or were they chosen to get the task all along. The whole thing comes to stand in a strange light if you take into consideration that Aharon, the cohen, had also sinned, not so badly that he needed to be killed, but nevertheless he did. Yet, he was not replaced from his office and the Levites were not placed over him, in stead became his aides. How is that for measure and equity?

When you are a secular it is easy to stay indifferent or just declare that such passage in the Bible doesn't make sense. When I was still busy as a legal professional, I saw that with matters decided by the Supreme Court or by the Legislator, you were intent on understanding and interpreting the law in an optimized way, but should you find a verdict or a statute that you cannot reconcile with the system of low, you are in a position that you can reject it.
A religious Jew, however, can never reject anything in the torah, hence he has to ingenuously reason around the whole text and persist endlessly to find sense. That is, from the perspective of secularity or of secular legality, a weakness, yet it is a strength by means of the resulting creativity and depth in the reasoning.
The end picture is that of a mixed one where both the sinner (Aharon with assignment to atone) as well as the righteous (the Levites) have their place and so it seems, the righteous as an aide to the sinner, who is to be the leader. Fascinating thought.
Posted by Unknown at 09:28 0 comments