The first three lectures of UCSD's MMW 2 (Making of the Modern World - Classical Traditions) I learned something I did not know before. I knew the Sumerians were the first culture in Mesopotamia we know of, but I did not know it was only with the archeological discoveries in the area in the 19th century that we actually found out about them. The clay tablets of Ashurbanipals library mentioned them and this is how we know they preceded the Akkadians, Babylonians and Assyrians, to name a few. Those were in the Bible and hence were 'known' until then. 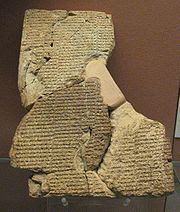 It makes Professor Chamberlain's lectures all the more interesting. As is his style, he takes this one through the texts. The two he discusses in the third lecture are the old Babylonian Enuma Elish and Atra-Hasis which are told to have roots as far back as Sumer, but are Babylonian after all. The first is a creation story and the second a flood story. Much is different with the stories of creation and of Noah's flood in Genesis, but by all means, there are parallels and unquestionably, the Babylonian version precede Genesis.

In the fourth lecture we are supposed to get some more insight in those Sumerian roots and I hope we will still get them. However, what is passed as Lecture 4 in the feed is an empty mp3 file. Maybe there was no lecture and we will still get this craved content. Otherwise, the recording may have failed and we have missed out on the Sumerians, once again and must wait until a later round of MMW 2.

Image: Cuneiform tablet of the Atra-Hasis in the British Museum on Wikimedia Commons (Public Domain)