Malcom Gladwell's new podcast is called Revisionist History (feed) and this title instilled in me a slightly different expectation than what I got in the first episode. I was expecting either a revision of any widely accepted narrative, or a study of any such widely accepted narrative that had been challenged, more or less successfully. What Gladwell does rather, is take on a certain subject and show how we would generally assume a certain history and in stead get another. It is not very different, but still it is not negating an established thought but rather revealing the twist of closer inspection versus superficial expectation. 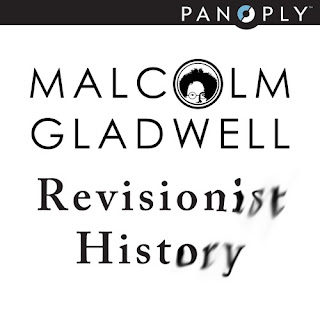 There are two episodes out, while I write this and I have only heard the first one, but this episode, The Lady Vanishes was so powerful, I just had to review immediately. Gladwell asks us: If Hilary Clinton will be elected as president, will that pave the way for more women in office or will generally enhance the chances for any other woman to be elected president? The historical sample taken is from the 19th century when the female painter Elizabeth Thompson was about to enter the Royal Society of the Arts in England.

Yes, we would expect such occurrences to work as a sluice that opens, but Gladwell invokes the concept of Moral Licensing from social psychology to show that the opposite might be true and presents the historic examples to support this kind of revisionist history (which I maintain is not exactly revisionist history in the regular sense, but we catch the drift). His point is that frequently individuals and societies allow particular cases of minority members (Women, Colored people, Jews etc) to enter a realm otherwise closed for them, only to satisfy their conscience and consequently proceed to discriminate with renewed ardor. The saddest example Jews in Germany as he takes it from Amos Elon's study "The pity of ot all" - which shows the Jews in German society from 1743-1933 occasionally succeeding to break the glass ceilings and walls, but nevertheless finding themselves eventually in a land that embraced the lethal antisemitism of the Nazis.

It is a very bleak conclusion; it cautions us that when we think discrimination might be over it may come back with a vengeance. While this may exactly be the case, there are two major reservations I have here. One is that this line of thinking has a tendency to be irrefutable because no matter how many examples you may find that discrimination is receding, it might still be a case of moral licensing. The second is that this idea of moral licensing comes from psychology, hence it describes processes in individuals and Gladwell takes this micro-level theory and applies it on a macro-level which is a jump cannot be made just like that.