I am too far away from the Netherlands and it took The Skeptics' Guide to the Universe podcast to alert me to something that has been going on my old country. There has been a law suit of a quack - Maria Sickesz - and the association against quackery - De vereniging tegen de kwakzalverij (VtdK) - about the fact that the VtdK had published a list of quacks which included Sickesz.

Sickesz is the inventor of a certain manual therapy called OMG (sic!), which makes medical claims that have no root whatsoever science. It just so happened though that two of her pupils (Albers and Keizer) got their PhD through a dissertation that mentions the fact that 67% of patient who underwent OMG, claim to feel better afterwards. The court in Amsterdam (Hof - see photo) uses this as basis to ascertain that the VtdK has not done enough research to claim Sickesz is a quack, hence they are convicted to pay damages / publish a costly rectification -- see verdict.

The court is blissfully ignorant of two facts. One is that the aforementioned dissertation was not a medical one, but rather one in economy. Furthermore, the judges very lightly take the conclusion of the dissertation as evidence. It reminds me of when I studied and taught law: legal professionals have little or no notion of scientific research and consequently are not capable of properly using scientific conclusions. This is terrible when legal decisions hinge on scientific, that is empirical non-legal insights. As here.

It is my opinion that for legal verdict to entirely rely on non-legal foundation is severely problematic from a juridical justification standpoint, but even if one must go that road, then do it properly. The Vtdk is now on the verge of bankruptcy and applies for support. If I were to support, I am a bit concerned where my money would go. The VtdK has the option of appeal to the supreme court (cassatie), but I worry the money will be used to comply by the Hof's verdict.

In the SGU podcast Perry deAngelis suggests: declare bankruptcy and reinstate the association with a new name, but NEVER rectify calling a quack a quack. Hear, hear Perry. And so, let it be said: Mrs. Sickesz is a quack. And in Dutch: Mevr. Sickesz is een kwakzalver!
Posted by Unknown at 15:07 0 comments 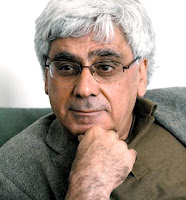 The Council of Foreign Relations also has its own podcast that I need to check out and it may well be, that there is an overlap with the University Channel Podcast. In any case, it is in the UC podcast I found the very interesting lecture and discussion with Professor Sari Nusseibeh.

Nusseibeh presents his Palestinian View on the Israeli-Arab conflict and surprised me with his pacifist, mild and non-polarizing tone. For that reason alone it is very important to listen to the podcast, or view the video. At the end, someone in the audience presents Dr. Nusseibeh with a question that had been bothering me throughout listening as well: Why isn't Sari Nusseibeh the Mahatma Gandhi of the Palestinians? The answer is slightly evasive, if not a bit contradictory to the previous presentation as it emphasizes how the belief in violence is still prevailing, whereas earlier it had been stated that the vast majority of Palestinians is ready for peace.

It would certainly seem very helpful if more of Sari Nusseibeh's idea's would be heard and this would represent more of a visible and viable stream in the Palestinian politics. He seems to be doing his part intellectually as you can see through his website, for example. But the question also comes to mind, whether what we witness there and in the podcast is genuine and there is a rather pounding attack from Front Page Magazine that accuses Prof. Nusseibeh of double-speak, that is, in English saying what the Western Public wants to hear, but in Arabic, saying the opposite. On the other hand, I also found severe criticism from the Palestine side at Znet where Nusseibeh is accused of giving up on the Right of Return. So enough controversial food for thought.
Posted by Unknown at 10:36 0 comments