Here is yet another tip that I got through the great blog of DIY Scholar. She reviews high quality podcasts, just like me, but is more exclusively focussed on University lectures and in addition writes also about books, vodcasts or video and anything else that has to do with free learning. 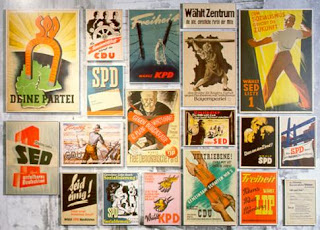 She has a very good grip on what academic institutions all over the world have to offer and as a result caught up on the British universities of Oxford and Cambridge, who have started to follow their American counterparts and begun to put good courses on line. One of DIY Scholar's mentions is a course on Oxford about German politics since 1945.

A German scholar, Andreas Busch (with hardly an accent it needs to be pointed out) gives this series with historic and legal constitutional background. The podcasts are enhanced with his power point (feed). I am in the third lecture now and like what I hear. A good podcast in political science and also interesting for history buffs such as myself. (And here I try to forget that once upon a time I taught constitutional law - god forbid!)

Here is a short review for a lecture series that I occasionally listen to. It is a twofold feature, officially named PACS 164A and PACS 164B. In the academic year 2006/2007 Berkeley offered these courses about Non-Violence. The lecturer Michael Nagler uses the first series to explain the philosophy of Gandhi and then proceeds to tell the history of Gandhi non-violent career and then connects to Martin Luther King. The second series intends to reveal non-violence in the current time.

I do not succeed in very persistently follow the lectures. There is an air of self-righteousness I cannot stand for a long time, no matter how hard I want to believe in non-violence. Nevertheless, I do not abandon altogether and so, some time in the far future, I will sum up these podcasts in hindsight. Until then, I'd like to point out again, they are there and deliver also some news. The readers that go with the courses have been published on line so that, everyone who wishes, can follow more closely.