I think May 10th will be a good day to start using the new design. On that day it will be three years since I started this blog. 1600 posts and 400 different podcasts reviewed and one and a half years with the current, adapted, design. As reported before, Blogger has expanded the possibilities with the standard templates and by that move taken away all the reasons I had for reverting to an adapted design in November 2008.

At a sample blog I have set up, you can get an idea what the blog will look like as of next month. The ease at which I can change the settings however, will imply that I, almost effortlessly, can continue to play around. Background images and color schemes are updated in a matter of seconds. It is the kind of flexibility I have been lacking for such a long time.

I would love to get some feedback on this projected design. Leave a comment and let your thoughts know. Thanks in advance.

A podcast that has many people excited is The Tolkien Professor (feed). Professor Corey Olsen from Washington College teaches the works by J.R.R. Tolkien in a way, as he claims, would have been approved by Tolkien himself. I know people who do the readings before they listen to the next podcast - that shows how involving these lectures are. 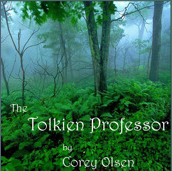 From time to time Olsen invites guest speakers and one of the regular listeners alerted me to one of them: Michael Drout (download). Drout is a philologist just as J.R.R. Tolkien and aside from studying the same subjects, he studied the work of Tolkien from a philology perspective. He starts the lecture by reciting Beowulf, as Tolkien would start his, and kicks off from the text and the words of Beowulf, taking it to Tolkien and to the Lord of the Rings from there.

The point Drout so elegantly and entertainingly makes is that specific words and philological mysteries in texts such as Beowulf force the philologist to make wide stretching assumptions and conjectures. In that process, when he has to leave the realm of science and more and more enters the world of imagination, as a philologist he has to stop. Tolkien would not stop. And so, Drout argues, in order to give the words he struggled with a life, he invented a whole world for them. And he gives a number of examples from both Beowulf and Tolkien's literary work. Even if you are not into following the entire course, at least pick up this bonus lecture.