Here is a very useful hint for podcast listeners (and mp3 player users in general). For it happens frequently you have to deal with audio files that have a very low volume level. For example, I am struggling my way through the podcast lectures of Professor Muller: Physics for future presidents. I have reached quantum physics and need all the attention I have to follow. But Muller has reached an audio level that is so low, I cannot even listen to the cast in my car. Well, it is summer, the air conditioning is stronger than usual, but still. The only place where I can get to the excited states of electrons and see if I can get a grasp on the workings of plasma screens and laser printers is in my bed.

Every father of young children knows the sleep deprivation that comes with bringing up the adorable brats. As a result, the bed is causing instant sleep and no quantum mechanics can stop me. I have to go over the lectures many times and still miss out onm them.

The solution is to enhance the audio and luckily there is a utility to do so. It is called mp3gain and it can be downloaded for free. One has to doctor the mp3 files before listening and then you will not have to turn the volume as loud as you used to in order to get the same level. Great stuff.
Posted by Unknown at 11:29 0 comments

You are not a Skeptic if you're not skeptic

I wrote to the Skeptics' Guide to the Universe, after the podcast had mentioned the case Sickesz vs. VtdK and I had blogged about it. The nice thing is, my mail was mentioned on the latest show (#102). That's nice. The blog is also mentioned, that is even nicer. But the nicest thing is the Skeptics prove to really be skeptics. 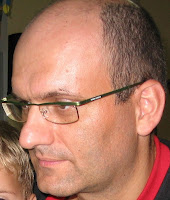 They read the blog and not matter it is called Anne is a Man!, they treat the writer Anne Frid de Vries as a she. She writes this, she goes on to say, etc etc. I think this is a point for SGU. Never take anything for granted. However, dear skeptics, I am really a man. Look at the picture, just so that you can be convinced.

While I am making side notes, let me make two more. One is: Perry is right; the VtdK must dissolve itself and a new association against quackery must arise and they must not go and publish the rectification that Mrs. Sickesz is not a quack - because she in fact is. However, and this is the side note, it is not going to help the president of the VtdK. Sickesz not only sued VtdK, but also the president. So even if the association goes bankrupt and from them the rectification or compensation cannot be coerced, from the president it can. And the bankruptcy laws are not very comforting for real people (natuurlijke personen) if they still are as they were when I left the country.

The second side note is on how I think, as a legal professional, the court should have handled such a case. I think that anybody who offers medical services out of the realm of EBM (evidence based medicine) is automatically loading on him or herself the suspicion of quackery. With little extra scrutinizing of the made claims, just as the VtdK did, this person can be called a quack and the quack must show evidence of the contrary if he wants to rid himself of the label. If on the contrary, one must prove quackery, there is almost, if not completely, an impossible task. When no connection with EBM is there in the first place, there is likely to be no study and in particular cases, the inherent claim will likely be that such studies are not valid anyway. In such an approach NOBODY can be called a quack and then the law would rule out a certain opinion as forbidden to be uttered in general which is against the freedom of expression. Hence, since Mrs. Sickesz is outside the realm of EBM and you can look at her claims and see that they are not reliable, then she can be called a quack. Mevr. Sickesz is een kwakzalver!
Posted by Unknown at 08:50 0 comments