Recently I have been dedicating all my listening time to one podcaster, Kevin Stroud, who offers two series on the web. The first is The History of English Podcast which has by now reached its 30th episode, 20 of which I have managed to cover since I made the discovery. The other is The History of the Alphabet which I learned about through the aforementioned and which I listened through from beginning to end in one fell swoop. 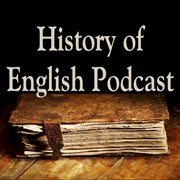 Kevin Stroud is an American lawyer with a love for language, who has taken up the unique challenge among history podcasts to relate the history of a language, any language. His history of the English language goes back to the earliest of beginnings, the Indo-European language and slowly takes it from there. He delivers a lot of linguistic samples but by following a historic narrative which is in many ways a retelling of the main stream history from the dawn of civilization up to modern times. This means he delivers material that is touched upon by many other podcasters. I am not sure whether he is familiar with them all, but I find his history to be closely in synch with what is known through other sources. What makes the podcast unique, original and highly interesting is the linguistic perspective. In addition, Stroud has a good voice and delivers his text in a way that is highly effective in audio, that is, his sentences are straightforward and he does not shy away from repetition so that you cannot get lost and his point passes really well. (feed)

During this podcast, Stroud naturally gives a lot of attention to the development of script in general and the alphabet in particular. For example he dedicated a whole episode to the letter C. However, for a more extensive and systematic discussion of the alphabet and this different letters, he decided to make another series: The history of the alphabet. This is more of an audio-book and it can be purchased from several vendors at a price around $9, but I bought it for $6 directly at the podcast's website. It is the first time I have actually paid money for audio and I have not regretted it for a single moment. This series has shown me how the Hebrew alphabet that I had to learn at a later age is much more closely related and traceable in the Latin alphabet with which I grew up than I thought. It clarifies some of the strange spellings you encounter, especially in English and French, but not much less in Dutch. I also never knew that the letters J and V are actually so new in our language that the first dictionaries that were made, like for example Samuel Johnson's (1755), did not even treat them separately from I and U.

I'll continue to catch up with Stroud's podcast and in the mean time I should be updating you on many other new podcasts I have been picking up on of late. Many of these also dive into ancient history, so it seems I am really going through a 'back to the roots' phase as it were. My playlist contains The Ancient World, Myths and History of Ancient Greece and the Podcast History of our World to name a few along this line.
Posted by Unknown at 22:00 2 comments