TPN's Biography Show just did a show on Santaclaus and with it has outdone itself in sheer entertainment, historic enchantment and even some raised eyebrows on my part. The show was fun, had great historic information which was compelling and thought-provoking, yet produced some details about Sinterklaas that sounded off in the ears of this semi-average Dutchman. 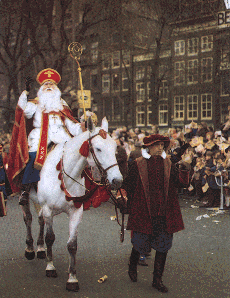 The entertainment lies with the opinionated disposition both David Markham and Cameron Reilly take in this show. Markham minces a few words on some conservatives in the US whose sense of injury is great enough to perceive a "War on Christmas" and feel the need to protect a tradition of which Markham shows that it is hardly a tradition if there is a war at all. And should you think there must be a tradition, wait for Cameron Reilly to deconstruct Santaclaus.

The greatest charm of Cameron Reilly's view of the origins I find is that he links back to Odin and the pagan traditions, just as most of the other rituals around Christmas root in European paganism. It is where he tries to render the morphing from Odin into Sinterklaas, so familiar for the Dutch, I think he makes a couple of mistakes, but nothing awful, to get back on track and reveal how the Dutch Sinterklaas morphs into the American Santaclaus with some of the details around this figure date back less than a century.

Reilly claims that Odin had a staff that was called 'zwartpiet' and that just can't be. But he when he reveals that the Byzantine Saint Nicholas had an Ethiopian servant, the next step makes it right again: for the Dutch, Sinterklaas comes from Spain and has a Moorish servant (or several) and this is Zwarte Piet, black Pete. Even in Israel the Dutch celebrate Sinterklaas and Zwarte Piet and the tradition of giving presents and they do so on the 5th of December. Let this be added to fill out a minor omission in an otherwise fantastic show.