The series History of Medicine Podcasts from Oxford Brooke University (School of Arts and Humanities) also called: 'Moments in Medicine', had a fascinating issue about the vaccination debate. 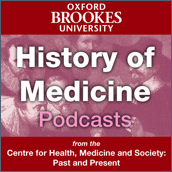 The podcast shows the loaded history of vaccination. Immediately upon the early uses of vaccination (or inoculation) the practice was contested. One almost gets the impression that people are naturally suspicious of vaccination. By all means, no one likes to be injected with alien content and certainly not if it causes disease. Even if the one disease is a mild one to prevent another more problematic one.

In all times, vaccination could only be successful if it was widely applied, enough to cut of the growth of the germ. This, for highly contagious disease, may require up to 95% use. Yet, this leaves a 5% or more section that need not be vaccinated, yet still can benefit from it. This benefit can also lure the false idea that the vaccination is not actually needed. Fed into the natural suspicion this gives root to the debate.

The LSE podcast usually offers lectures on subjects that are laden with meaning in current world affairs. Whatever is hot in politics is discussed with scientific (most of the time) and hence you can find a multitude of talks on Climate Change, Credit Crunch, Middle-East and such. Occasionally much less trodden paths are offered and there is one I would like review here.

Professor Arthur I. Miller revealed the results of his study into the friendship between Wolfgang Pauli and Carl Jung. Pauli, the tormented yet brilliant physicist went to see Jung for psycho-analysis. Jung found Pauli's dreams so fascinating he paid special attention to the scientist and also when Pauli was declared healed - there are some doubts to cast on that - he and Jung remained in contact and developed a friendship or at least a regular basis to discuss his dreams.

Consequently, this talk is mostly about Pauli; a bit about physics and much about Pauli's troubled private life with bad marriages, illicit affairs, bar room brawling and a lot of excessive drinking. Jung pops up when Pauli seeks help and Jung can apply his ideas of dream interpretation. The richness of Pauli's dreams allow for full application of Jung's interest in alchemy and mythology, which in turn appeals to Pauli. Where Miller leads is that Jung's metaphysics actually may have led to some of Pauli's important conjectures. Whether Jung has really helped Pauli to become a more integrated person though, remains, as said, in doubt.