Sweet and spicey soup with zucchini

I never know what to call the vegetable. Is it zucchini? Squash? Courgette? Whatever it 's named, that's what it is and for this recipe I used the dark skinned type. There is also yellow skinned and light green. There is also a difference in shape. I took the elongated version, not the ball-shaped or the ones that look like small pumpkins. All in all, the difference in taste is not so huge. I guess you can use them all, but for the sake of accuracy: dark green, elongated zucchini is what I used.
Another ingredient that needs some discussion are the spices. I use ground spices, mostly, as they produce a more evenly distributed and stronger taste. If you ground yourself, be aware that finer grounding gives stronger taste immersion, especially when fresh. Still, you have to be careful and know your stuff. A spice like cinnamon can be different in strength from one ground packet to the next.
Another ingredient where the strength can differ enormously is sesame oil. I have the dark, concentrated stuff that is very strong. I have no experience with the lighter version. I only know from an Indian woman I know, who is used to the light version, that in case she can only obtain the dark one, she mixes it with regular oil in order to get something near to what she is used to. In short, the difference is enormous. 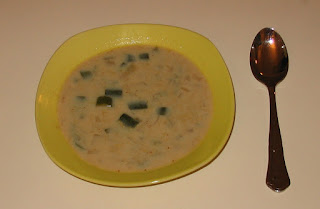 Stir fry in the butter and sesame oil, first the cinnamon, cloves and galanga and then, after a few minutes, when you smell the spices, add the finely cut zucchini and onion. Stir fry and slowly build up heat, until the onions and zucchini are shiny. Add salt and bay leaves, stir and slowly turn down the heat. On low heat add soy sauce and water after which you turn on the heat again. When the soup is boiling, add the garlic. Boil some more and then add the honey, turn heat down and let the soup simmer. Taste from time to time; add salt, honey or soy sauce (or even pepper) according to your preference and the taste development. Take the soup off the fire and add milk. Allow to stand for at least 30 minutes.

A word on calories. I try to cook on a low fat basis. The interesting discovery is that whatever recipes I have learned or developed over the years, when I redo them, I find that the amounts of oil, butter, cream, honey and so on can be significantly reduced. The rule of thumb is that one should not have more that one table spoon of oil/butter/cream etc per 4 servings. For stir frying, for sauces, for stews, it surely makes it more difficult to retain the taste as should, but it can be done.
In addition, wherever possible I use low-fat ingredients such as light honey and skimmed milk in this recipe.
Posted by Unknown at 21:17 1 comments

Only in America -- Podcast

Larry Josephson is an experienced radio maker who conceived of a history podcast that makes an expose of various aspects of the history of Jews in the United States. It carries the title 'Only in America' apparently as an expression of the feeling that Jews were never as well accepted historically as they were in the US. Nevertheless there are also episodes about antisemitism. In addition there are full feature interviews and a couple of theme issues, that all in all are covered by the subtitle: "350 years of the American Jewish Experience."
Larry's background in radio journalism has led him to do much more than what you find in regular podcasts. These are full blown radio programs. They are complex productions bringing together source material from Columbia University's oral history program and snippets from interviews and lectures as well as historical audio material. A good example in point is the latest edition 'Over the Rainbow' about the Jewish roots of Hollywood and the development from its origin days to date, with the Jews that took part and the measure to which Jewish content could make it to Hollywood productions.
I have compared podcast to talk radio in other posts. Only in America is talkradio that wasn't made for regular broadcast but turned into podcast in stead. As far as I could discover from either the shows or the references on the web it was never carried by any station on air. This seems to me the best example of talkradio turned podcast. I can only wish Larry reaches a larger listenership than he would have with regular radio, he deserves it. This is a great podcast.

Off on a tangent -- David Kalivas's podcast

You need to be up to date on the subject that David Kalivas discusses in his World History podcast. With a lot of enthusiasm I made a second run of his series of lectures and while I enjoyed it, again, a lot, I was disappointed as well. You cannot take the series as a full blown educational podcast. After listening you will remain with too many fragments. If you need an introduction, or even an outline of World History, do not take on David Kalivas.
Although he is a very pleasant and entertaining lecturer, he goes off on tangents all the time. Consequently, the historic milestones are not all mentioned, or even put in order. Whatever he says is very worthwhile and I liked hearing his words, but they serve an entirely different purpose. They pick and choose on some aspects of World History and give some in depth reflections on them. This means that if you are on par with the discussed epoch, setting and events, his lecture can be very thrilling, but that is a lot of prerequisite to take into a podcast.
Posted by Unknown at 14:58 0 comments