This cyber-age in which everybody is networking through the internet, it is inevitable the practice leads to new vocabulary. Necessarily it is a matter of time, language podcasters such as The Word Nerds, pay attention to the new lingo. 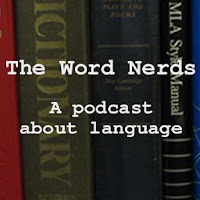 It seems to me that the greatest hype of networking currently is Twitter, but in their show about Social Networking (#115) the greatest amount of the Nerds' interest goes to Facebook - a good number two in the range of social sites, I guess. The reason for this is not in the least the Nerds are heavy Facebook users themselves. As a consequence, the initial part of the show is mostly about the use of Facebook, rather than the vocabulary. When they finally get to it, the listener will learn, among others, new meanings for verbs like to peep and to stalk.

The Word Nerds podcast has a page of its own on Facebook, though their own site also has a forum where the audience can socialize. It is an example I try to emulate. For Anne is a Man, there is also a blog network page on Facebook and the forum is shared with Dara's and Baxter's blog at The Podcast Parlor. And even on Twitter, I can be followed.