With the elections coming up in Great Britain on May 6th, there are several ways to go following it in podcast and getting good background information. Always good is The Economist (feed) which does weekly updates. A week is a long time in politics, especially during the election season.

Australia's Rear Vision had a special: UK Elections 2010. As usual with Rear Vision, it puts the current situation in a historical perspective. It goes back to the early 1970's when Labour reign came to an end. Labour failed on economics and the conservatives took over with Thatcher. Labout only could take over after having reformed itself to a centrist party under Blair. In 2010, Labour seems to be losing, but the Conservatives have a hard time to capitalize on that. 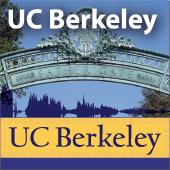 I would like to recommend diving deeper into the history of the UK in modernity and take up Berkeley's History 151c - The Peculiar Modernity of Britain (feed). Professor James Vernon is a very captivating lecturer with good British Humour thrown into the academic mix. His grand theme on Britian's peculiar modernity, is that the kingdom developed into a liberalist democracy full of paradoxes. (History 151c syllabus) Tomorrow will be the last lecture 'Thatcher and Blair: the return of liberalism'.

I love the way Vernon typifies the austere character of the socialists (and liberals) and the savoir vivre of the conservatives, which explains why the conservatives appeal to the masses (for being fun) when in fact, we might assume that the socialists have the mass's interest served in their politics. The liberals go back and forth between socialists and conservatives and occasionally have a feeble life on their own. Yet, the just might take on a significant role in 2010 as the Liberal Democrats.

Quick update: There is also a lecture at the LSE podcast about women voters in this election.

More of The Economist:
Avi Shlaim on Israel and Palestine,
A crisis of authority in Iran,
Comfort with Obama,
Democracy in America - podcast review,
Issues of Race.

More Rear Vision:
Two podcast issues on the history of Haiti
History of Yemen,
Freemasons,
China,
A history of the Israeli-Arab conflict.

More History 151c:
The Great War in podcasts,
The Indian Rebellion,
Friday Portion for Anne is a Man.
Posted by Unknown at 18:00 0 comments

In 1600 after seven (some say eight) years of trials, Giordano Bruno was convicted by the Roman Inquisition for heresy and burned at the stake. Bruno was a thinker who dabbled in mathematics, astronomy, philosophy and theology. Even if his ideas were not exactly fitting with the Roman Catholic Church's dogma, you wonder why the Inquisition went through the trouble of spending years of trials on an obscure thinker and having him publicly executed in the end. 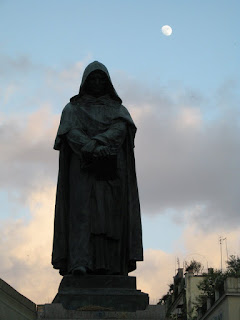 We have met Bruno in podcast before. The Dutch OVT Podcast had an issue about him and just now CBC's Tapestry spent 50 minutes on him. Just as OVT, there was a lot of attention to begin with for Bruno's statue on the Piazza Di Fiore in Rome - the place of his execution. Bruno was eventually received as a martyr for free speech, free thought and even atheist celebrate this old Dominican. Somehow, ideas may indeed be really powerful, but if I have to guess what did him in, it was not that and maybe not even that he refused to recant. He denied the Inquisitors the right to judge him and that must have been just a little too much.

Tapestry's guest Ingrid Rowland then makes a very interesting remark: Maybe if Bruno had not been a Dominican priest, but rather ordained in the order of Jesus (The Jesuits). They might have been able to control him and protect him. By chance, an example of such a Jesuit jumped from another podcast I listened to: Entitled Opinions, which had Paula Findlen on the show to talk about Athanasius Kircher. Kircher lived half a century later, had ideas about just as wild and exotic as Bruno, but he was a Jesuit and, as it turns out, somehow enjoyed the protection of the order, also against the Vatican.

By the end of the Kircher show, Bruno comes up. Comparisons are made and Findlen even proposes in a very convinced way that Kircher must have read Bruno. You really must listen to these shows. As much as these men are megalomaniac thinkers and part or full heretics, which may seem sincere, but also has an element of unrewarding idiosyncrasy to it, they speak to the imagination and somehow continue to inspire.