These days there are plenty of podcasts taking one economic take or another at the current economic downturn that is going on. I am not sure yet whether it may already be sufficiently termed a depression, but surely it is repeatedly compared with The Depression of the 1930's. Very few, however, take a comparative delve into the 1930's depression. 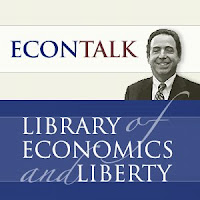 The latest edition of EconTalk is an exception to that (EconTalk podcast feed). In this chapter Russ Roberts speaks with Eric Rauchway the author of The Great Depression and the New Deal: A Very Short Introduction. The one hour talk makes a couple of points about later economic crises, but first of all thoroughly describes what went wrong in The Depression, starting with 1919.

1919 is a bit of an unexpected starting point, yet, with it being the date of the Treaty of Versailles, it is almost naturally the starting point of nearly everything in the twentieth century. While kicking off, Rauchway uses Keynes to say something about pre-1914 Europe that I have heard mention before, but never so neatly and never so specific to economics: Before the Great War, the world and most notably Europe, was a kind of free trading zone, allowing for a global economy and this was killed off by 1919. And the world would revert back into isolationism, until only recently. In broad terms, this development lays the basis to the Depression. There is of course much more and much is comparable to today, but this starting point was a great refreshing insight which makes the podcast right from the get go.