Enjoying the history lectures of the University of California in San Diego (UCSD) has a certain immediacy to it. In an unaltered way one gets the lectures; they are recorded automatically and put on-line without any further editing. And by the end of the quarter, the lectures are taken off line again. So, you have to be there, as it were. Deep down, you don't because you can set your podcatcher to store any content that comes out and you may even do some editing yourself (I know of nobody who does it, although cutting away the silences, would improve the files greatly at little investment of time). Even if the podcast when it fades, loses its title in iTunes, your content is still there, to be enjoyed when and where you want - as is the strength of podcast. 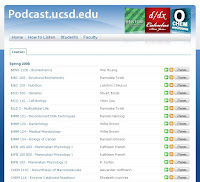 And there is something to be enjoyed. This quarter the second part of world history, MMW 2, the Making of the Modern World over the time of around 2000 BC to 100 AD is being taught by Charles Chamberlain. He makes a point of it to argue in favor of using the abbreviations BC and AD, by the way - if it matters all that much. I loved Chamberlain in MMW 3, last year and he is off to a good start already. Though you can choose to skip the first lecture, it is mainly administrative. (MMW 2 - The Great Classical Traditions)

Aside from the superfluous content for podcast listeners, Chamberlain spends some words of explaining his perspective and terminology and I liked being filled out on that point. The MMW-series is different from other podcast series in that it takes western and non-western history together for each era that is being covered. The result is a refreshing and much wider take on history. What has so far struck me is that in spite of separation, so much added insight is had by seeing the parallels. This time we are in for exactly that kind of a treat again as Chamberlain argues that all major (at least three) world cultural traditions had their classical stage during the MMW 2 stretch of time. So we will be seeing the coming of age of them all. I am loving it already.