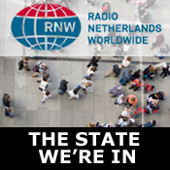 The State We're In
BE A MAN
Men grappling with what it means to be a man, including the story of the father of a murdered teenager who counselled his son's friends against seeking revenge. The son of former German Chancellor Helmut Kohl talks about getting out from his father's shadow. And a man who found making the coffin for his distant father, an odd gesture of love.
(review, feed)
Posted by Unknown at 19:00 0 comments