Norman Centuries - Lars is back!

Earlier today I wrote about History According to Bob as one of the oldest podcasters in the history genre. What is probably THE oldest, that is, the one who started history podcasting the earliest is Lars Brownworth. Lars started 12 Byzantine Rulers (feed) mid 2005, when podcasting was still very young and history podcasting had still to be categorized. 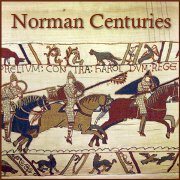 Lars went through Byzantine history in two and a half years and then set himself to writing. By now he has finished writing his book (about Byzantine History of course) and he has started a new podcast series: Norman Centuries (feed) Lars is going to tell in the well voiced fashion we know of him, the riveting story of the Normans from about the tenth to the twelfth century.

One installment is out and I have no idea how much time we will take until the next. Here we meet Rollo, the Viking that was the fear of the north of France just has other Vikings were of other shores of north-western Europe. They raided the rich coasts with their ships, but since these ships had little depth, they also sailed up rivers. Rollo made it as far as Paris, that he besieged at least twice. The emperor hoped to buy him off by giving him land, Normandy, and making him into a vassal. We have little doubt the Normans were not really subdued after that.

Pentagrams - History According to Bob

By now the stream of history podcasts flows so wide, one can hardly keep up with everything. How different was it in the early years of podcasting, say three years ago. One of the very few notable history podcast then was History according to Bob. What is amazing is that Bob is still around and still producing at his unbelievably high rate of one podcast per working day. (feed)

A recent episode I enjoyed, was about pentagrams. Bob checked his sources and gave a twenty minute lecture about the use and meaning of the pentagram through the ages. As with many symbols, it turns out to be one used and reused, intensively and one that has a wide scale of meanings bestowed upon it. Bob with his sense of humor and knack for demystification puts much of the fads and scares in perspective.

Bob covers every conceivable era and subject in history and has therefore a daily offer than is able to please everyone. This does not mean Bob merely scratches the surface. Frequently he digs through a theme or a historic occurrence over several episodes and so there is much to be had if you stick with him.

The style is that of the straightforward, nearly unedited, monologue podcast and this is where Bob has remained in the early ages of podcast. He has no music, sound effects or even a visual to come with the podcast. Also, his consecutive podcasts do not stick to the subject, even if he is in a series. The issues will be interspaced with different subjects, so that in the end, I can hardly see how anybody would listen to everything Bob podcasts, but rather expect every listener to do what I do: keep an eye on Bob and pick out the promising chapters.

My next post will be about another founding father of the history podcast genre: Lars Brownworth.

More History According to Bob
Pick and choose with Bob,
1000 AD according to Bob,
The battle of Tours,
The Franks,
Virginia Oldoini.
Posted by Unknown at 16:00 0 comments

iTunes 9 - help for the podcast listener

Since a couple of weeks, iTunes version 9 has become available. If you haven't installed or upgraded to iTunes 9 my advice is to do that.

With iTunes 9 one gets a couple of advancements that make life for the podcast listener much easier. One is that it has become possible to convert regular files to podcasts, which means they will behave like podcasts (remember playback position and skip when shuffling) and will appear in the personal podcast library. Another is that the binary setting that indicated whether a podcast was new or not, has been extended with an intermediate state. If you started to listen to a podcast and have not heard it until the end, this new indicator will show such and differentiate from entirely heard files. 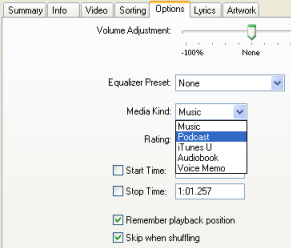 Here is how one converts a regular file to podcast. One selects the file (or several of them together) and gives a right-click. The option to choose is 'Get Info'. The info window of the file (or files together) will appear and here one selects the tab 'options'. Under options a pop-up that allows to set the media type - 'podcast' is one of them.

(See screenshot to the left)

I hope iTunes will continue to be improved. I'd love to get the chance to organize my list of podcasts. In stead of getting them according to the alphabet, I'd love to be able to categorize them and store them in separate folders.

Another improvement I'd love to see is a better integration with downloads. I'd love to see which podcast files are being downloaded, or waiting to be downloaded in my podcast library. And I'd love to be able to change the order from there, as well as easily identify which files have just finished downloading.