It was promised at the start of the two last programs of Rear Vision I reviewed: both would be part of a double show, yet it took some time for the second of each to appear in the feed. Today I listened to these two follow-ups and I want to warmly recommend both, but also want to add: don't listen to them in the order I did.

The Iran show (Iranian Revolution) will take the narrative further from the 1953 coup and describe the regime of the Shah, how it could stay in place for over 25 years. It was a regime of terror and intricate division of the opposition. Yet, when somehow Khomeini managed to become the focal point for opposition unity, the Shah's regime crumbled in little time.

The show about the Peace conference (Impact of Versailles) will highlight and discuss all the alleged bad effects on specific nations. Not just the question whether it was Versailles that brought Hitler to power, but also about Yugoslavia, other parts of Eastern Europe and importantly the Middle East. It is said that especially in the Middle East the effects of 1919 are still felt and the invented nations (Iraq, Syria, Lebanon) and overlooked nations (Palestinians, Armenians and probably also Kurds though they are not mentioned) are still troubled by the artificial terms set in that time. 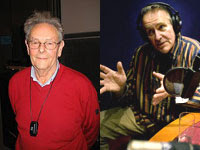