The New Books Network (NBN) is an umbrella for the numerous "New Books in ..."-podcasts, among which I have been following New Books in History (feed) for ever and I always pick and choose from its endless offering. The podcast review below is about an interview with the author of a new book, that was not only published in the New Books in History feed, but also in New Books in Jewish Studies and New Books in Middle Eastern Studies: Hillel Cohen, "Year Zero of the Arab-Israeli Conflict 1929″ (Brandeis UP, 2015). But first a digression. 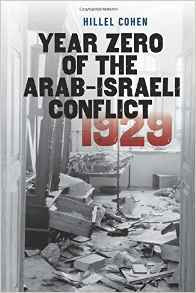 Not in a neutral way I can tell where I am from. I was born in The Netherlands - that is not the dangerous statement. I can even say I originally come from Europe or the EU - you do not have to agree with the EU or like Europe to still find the statement perfectly acceptable, but how can I say where I live? I have to say I live in Israel, or I can say I live in Palestine and any which way this is a laden statement. Even the fact that I am an Israeli citizen, especially in the light of being also Dutch, is seemingly putting me in a certain camp. That is what the Arab-Israeli conflict does for you. I live in this conflict even in the language of it and there are no words you can use that will not push you to one side or the other.

Hillel Cohen explains that the conflict may have started before 1929, but his book "Year Zero of the Arab-Israeli Conflict 1929" intends to show that the conflict as an historical entity, that is as a subject that is named such and written about started in 1929. And ever since we are not only living in the conflict, we are also not capable of talking, writing about it without getting trapped in the sides and consequently in only one perspective. During the interview on the podcast New Books in Jewish Studies he shows how he struggles with it and tells also how he encourages his students to make an effort to change perspectives.

I was very much taken in by the entire interview. Even though I am well familiar with the developments in the 1920s and also with the politicized nature of the historiography of the conflict - Hillel Cohen showed his dedication in a very candid way. What you get to see is how this historian, knowing he is part of one side and drawn into one perspective, puts in a tremendous effort to reveal the other perspectives, first of all to himself, but also to his students and his readers. It takes his academic work beyond academia, beyond politics to a realm of true soul searching. And this, as I can reveal about myself as well, is also what the conflict does for you.

Therefore this issue of the podcast is a must listen for anyone who is remotely interested in the conflict. In addition, this post is paving the way for an upcoming podcast review I am working on. This is about a podcast that is entirely dedicated to the history of the Arab-Israeli conflict.