Even though the discussion is still going on whether climate change is happening and whether it can be ascribed to and influenced by man, this seems more of a sideshow these days. There seems to be consensus there is Global Warming, man has caused it largely and must now make amends. This opens the possibly much more difficult issue: what needs to be done. Nicholas Stern, a British economist wrote about that in what has become known as the Stern Review (2006). 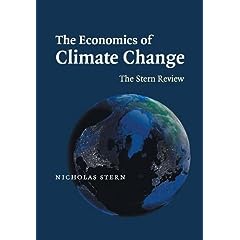 On January 7th, Princeton invited Stern to come and speak about his report. The lecture was recorded and published as a podcast in the UChannel series. (site, audio, video) In spite of the many slides during the talk, this is a very informative podcast. Stern explains, in terms largely comprehensible for non-economists, how climate change implies a considerable economic crisis. Even though the scope of the change is unknown, he proposes sound models for projection and on the basis of these projections one can assume the measures to be taken.

Once a model is chosen and one ponders on the measures to be taken, Stern claims, not surprisingly, these measures need to be global and are directed for a very long term. As to practical figures, he brings some clarity to their proportion and their fairness. When talking of emissions, it is said the Western World largely attempts to reduce with 80% in a certain amount of time. Whether this is a lot, fair or very little, is made more clear in Stern's talk. This is one of the practical points where this podcast allows the lay listener to get some more grip on the huge and sometimes very abstract problem of climate change.

More UChannel on this blog:
Islam meets Europe,
The rise and demise of Palestine,
Alan Johnston,
Nuclear Terrorism,
Attack Iran (or not).