In Stanford's Global Geopolitics course (feed) professor Martin Lewis makes a remark which reminded me of a very similar one in a language podcast. I wrote about it; one can approach grammar prescriptively and descriptively. The same thing Lewis states about maps. Maps can be made to carefully describe the situation on the ground, also geopolitically, but maybe more often they are prescriptive and represent the area as it ought to be. One may safely assume that any map that attempts to merely describe a geopolitical situation has prescriptive implications.

What we are seldom aware of is that even the simplest standard maps are prescriptive and Lewis tries to bring the point home by giving descriptive maps for example of Somalia (divided up in separately ruled area and just as many unruly, clan-controlled regions) or of the Western Sahara, or of Kashmir (divided up between India, Pakistan and China). 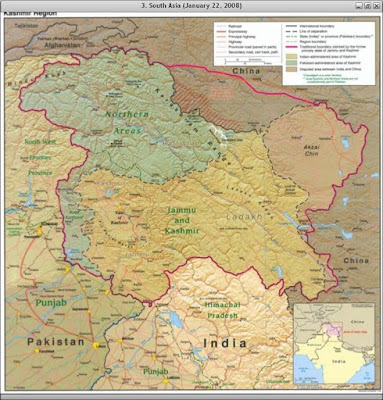 The course will successively address the various global regions and thus, by means of maps, give some insight in the major, sometimes even hardly known or forgotten geopolitical contests. A very fascinating course, especially for map lovers and a great successor to the previous Geography of World Cultures (feed). So far we have had three lectures; an introduction and exposes about East-Asia and South-Asia and thus far, we can see it has considerable overlap with the previous course. In many ways that should not surprise us as naturally the geopolitical tensions are rooted in much of the cultural, religious and linguistic divisions in the world.