The Middle-East and its ever-lasting conundrums are, naturally, a matter of huge interest to me. UChannel Podcast is a regular supplier of lecture podcasts on the subject, with writers, diplomats and politicians addressing the various subjects. Today I took two of those in a row. 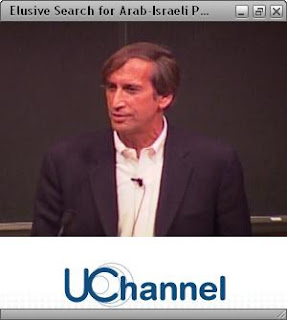 The first and the toughest to hear was Saree Makdisi's lecture on the Palestinian life under Israeli occupation. Tough to hear because of the terrible everyday suppression that is described. Tough also because Makdisi proposes neither solution, nor hope nor strategy towards betterment. His only contribution in that direction is the description of what in his opinion should come into existence: a one state solution. A democratic, multi-ethnic, secular state with equal rites for Jews, Arabs and everybody else. This is the most beautiful, yet the most unrealistic outlook to describe and without any road towards it, what use is it? It taught me this: that also on the side of the Palestinians the two-state solution triggers doubt. (On the Israeli side )

In the second, most recent, lecture Aaron David Miller (picture) renders his criticism mostly toward US foreign policy and made a very good address to the books of Jimmy Carter and Walt and Maersheimer , to give some perspective. He also made a remark about the Palestinians, that gave some perspective on why the situation for them is so hopeless: there is no monopoly on either a diplomacy agenda, nor on the use of violence. It is as I have described it for myself time and again: two peoples, mostly the Palestinians are stuck between a rock and a hard place - between leaders of great incompetence, lack of courage and vision. The sad conclusion is once again: we muddle along. More of the same, with simple people paying the heaviest price.