Speaking of Faith and its host Krista Tippett were delighted to have Desmond Tutu on the show and it sure turned out to be very interesting and inspiring. The start, however, in my humble opinion, was slow and awkward. What was supposed to be funny, remarks about dried fruit on the table and Tutu's laugh about the Beyers-Naude highway, missed the mark. One should listen and forget about that beginning. 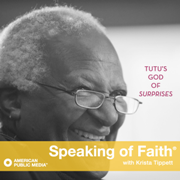 What is great is how Tutu tells about the struggle against apartheid, also when it was already gone as a system. The struggle to let the amnesty and forgiving work. And most of all, to rid the soul of its thinking in racial terms. Tutu reveals of his own fall into the trap. It makes the lessons of South-Africa universal.

With respect to universality it is interesting to hear Tutu speak about the Dalai Lama. I always wonder how true believers of one faith look at those of others. Tutu says:


Do you really think that God would say, "Dalai Lama, you really are a great guy, man. What a shame you're not a Christian."?

Entitled Opinions as opposed to other podcasts put him in a less favorable light. Where others are blinded by the military successes and get carried away with the size of the empire he allegedly conquered, Entitled Opinions on Alexander the Great emphasizes the folly of his campaign. It emphasized the fact the conquered land could not be held. And most of all it showed how the hero got carried away by his own issues, not least of all poetry.

The point the show begins with is this: a hero needs a poet. There is no hero if his story is not sung. Alexander understood that and as an aspiring hero he, in turn, was inspired by poetry, by Homer's Iliad. His example was that of Achilles, and so it is also poetry, that teaches the hero, what is heroism. Alexander in his uninhibited campaign was driven by the wish to emulate Achilles - for good and for bad.

Added to that is the celebration of alcohol and drunkenness. Added to that is Alexander's diminutive posture and deformation in the neck and we see an entirely different picture emerging. This is not the story of the hero of heroes, but rather of the lunatic with too much power and with generals too good to fail on the battle field. Generals who, as is told, feared the battle field less than their crazed emperor in the drinking party.

More Alexander,
The Biography Show,
Hardcore History,
History according to Bob.
Posted by Unknown at 06:00 0 comments