A century of geopolitics - podcast review

Stanford's podcast The History of the International System (feed) is an excellent podcast in contemporary history, but the title may be misleading in a way. As explained in the first lecture and recounted in the first review I posted, it is claimed that among states there is some kind of cohesion and dynamic, hence a system.

When thinking of a system of such sort, one may immediately think of institutions, no matter how weak - at least so did I. I thought of the League of Nations, the United Nations and the EU, but these hardly figure. NATO does slightly more so, but not at all do other international organizations that, it cannot be denied, each in their own field and fashion attempt to order the international world. I am thinking of the OECD, the WTO, the IMF and such. This course however is not so much into legal or economic order. Yet is much more a traditional history lesson in geopolitics, paying attention to the major conflicts and its surrounding phenomena. We go from the origins of the First World War, to the Great War itself, to Versailles, to the interbellum, to the Second World War, to Yalta, Potsdam and the new strategic reality within the Cold War and nuclear arms race, decolonization, the end of the cold war and what came after that. 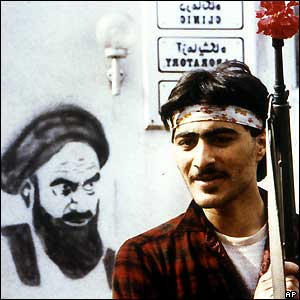 As a matter of fact, no matter how interesting, up to the end of the cold war the course holds hardly any surprises. Much more compelling, innovative (if tentative) is the lecturer, Professor James Sheehan's attempt to analyze the system of the new order with one superpower and the rise of Islamist fundamentalism. I would urge everybody to go through the whole course, but if you want to jump ahead to these cherries on the cake, do not enter too late, as the roots of the new reality are pointed out early on, especially explicit from 1979 on. 1979 the year when Iran became an Islamist republic, the Soviets invaded Afghanistan and Saddam Hussein came to power in Iraq.