Now that the US Supreme Court has decided that the prisoners in Guantanamo Bay have the right to challenge their detention in federal court, our attention is, for a moment at least, back on this piece of Cuba. It always bothered me: how can the US have a naval base on Cuba - they are enemies, or at least not the best of friends. From a quick look at Wikipedia I learn, the base has been there, ever since 1903 or so. How did that work during the Cuban Missile Crisis?

I always pictured Guantanamo as something in Cuba's periphery. An island off the coast - even if it is called a bay. But in the Global Geopolitics podcast (feed) Professor Martin Lewis shows a map of Guantanamo Bay. The bay is on the main land of Cuba. And the US base, doesn't even surround the entire bay; it is on the entrance to the bay. A deeper section of the bay is Cuban, Bahia de Guantánamo. The case gets more and more peculiar. 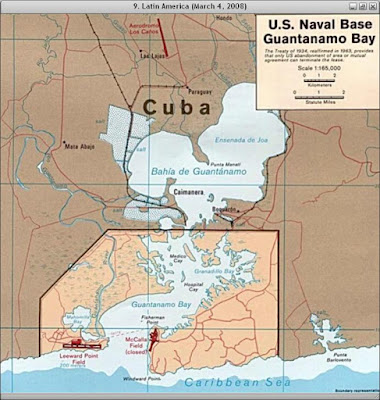 The map of the bay is only a tiny section of the lecture, which deals with the geopolitical situation in entire Latin America.