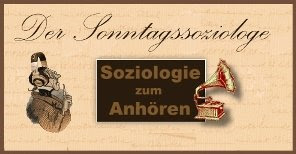 Invariably, the question is read by a woman (Tabitha Hammer) with a French accent in her German and the answer can be a short as the one to the question What is Murphy's Law. The podcast breaks down, before the Sunday Sociologist succeeds in speaking. And so, this poking at sociology is apart from parody, also a bit of an audio play.

The most charming issue, I found, the one that tried to address the definitive question, What is sociology. Here the question doesn't come from the nice French girl, but rather from the Parents. 'Your brother makes machines, and you? You make... sociology?' Yes, I studied sociology at some point in my life, so I commiserate. René takes us down the line of the gruesome jargon of sociologists, deliberately mauling the answer. I hope his parents still love him.
Posted by Unknown at 11:00 0 comments