The UChannel podcast had a series of three lectures by Ian Buruma around the subject of religion in modern societies and its role in democracy. The starting point is the division that is taken for granted in Western Societies: the separation of State and Church. Buruma spends his first lecture in analyzing Europe and the US in how religious and secular authorities are separated and how the interaction unfolds so differently. Yet Buruma, also sees similarities. 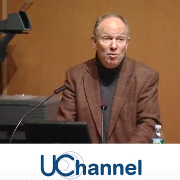 In case one is inclined to think that non-Western societies do not have the tense relationship between religious and secular authorities, the second lecture is especially relevant. With the examples of China and Japan, Buruma attempts to refute this idea. Also in the history of these societies, state and church had a complicated relationship, there was need for separation and secular authorities continue to feel threatened by religious groups.

The conclusion is that religion always represents a political force and Buruma's main point is that religion needs to be tamed. It is indispensible, but it has power beyond the secular state and can therefore present a serious threat to law and order. The implicit point is that this goes for all religions, but the paramount example is Islamic fundamentalism and this phenomenon is carefully discussed in the third lecture.

The trilogy is exciting and thought-provoking. Some of it is tough to follow. The first lecture is read from paper, the second is about much less known history and the third is so contemporary, it is the least structured. Despite these little drawbacks, it is one of the best series I have heard in months.