The DIY Scholar and others have already recommended Yale's new open course Introduction to New Testament History and Literature with Professor Dale B. Martin. And I am here to recommend it also. (feed)

However, a discussion rose in the Podcast Parlor, because in this lecture Dale Martin made an attempt to frame the origins of Christianity in the Judaism of the Second Temple Period and carelessly characterized Judaism as "an ideology of empire and world domination embedded in [the] scripture, and yet [the] social and political situation was just the opposite." This had some eyebrows raised yet Martin never made any renewed reference in the lectures afterwards to this crude line of thinking.

In stead he is fresh, provocative, clear and at times entertaining. He also stimulated me to refresh two other podcast series on the same subject: Thomas Sheehan's The Historical Jesus (feed) and Philip Harland's Religions of the Ancient Mediterranean (feed). These two make for a wonderful addition and parallel coverage of the same subjects, each in their own way. It needs to be noted though that Sheehan's podcast is rather old and is not up to today's audio standards and also offers the chapters in the wrong order. It is still a great series, just check with the syllabus (which is part of the feed) in order to identify the right order.
Posted by Unknown at 18:00 0 comments

Islamophonic - podcast at The Guardian

In an attempt to give Muslims a voice at the newspaper The Guardian has a podcast named Islamophonic in which host Riazat Butt explores Islam subjects in England and abroad. Abroad meant among others she went to Germany to get a taste of how Muslims are treated there, but it also meant joining up with the podcast Sounds Jewish (also by The Guardian) and discuss how the Gaza war affected English Muslims, Jews and their relationship. (Islamophonic feed, Sounds Jewish feed) 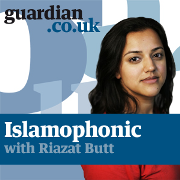 The Gaza issue was fascinating to listen to, especially to observe how everybody evaded the hot potato, that is, refrained from the faintest of inflammatory speech, to the extent there was even no hint of criticism. The Germany issue disappointed me as it just spoke of Turks, assuming all German Muslims to be Turks and all Turks in Germany to be Muslims. My warmest recommendation of a recent issue would be the one about Ramadan and Black Muslims.

The Ramadan subject delved into the practical question of how to cope with the daily fasting over the stretch of a whole month. A dietitian was invited to give good tips. The subject of Blacks took on the, I would expect to be controversial, issue of racism in the world of Islam. Whether overtly or not, the podcast claims there is a tangible hierarchy in which Arabs stand at the top, Asian Muslims (Pakistani, Malaysians etc.) follow. White Europeans seem to have an unclear, but surely favorable position, yet Blacks/Africans suffer being at the bottom. This affects the treatment in Mosques and on matters of intermarriage as is reported with examples.