The recently discovered podcast New Books in History (NBIH) is putting out new issues weekly. In the mean while I am trying to catch up with the backlog and as a consequence, I have still to cover all of its work. And I want to, as this is an outstanding new podcast on my horizon.

One of those podcasts from the backlog had host Marshall Poe interview the historian Samuel Kassow. Kassow wrote a book titled: Who will write our history. It puts a finger on a very ironic, almost too sad to contemplate point that the historiography of the holocaust is mostly based upon the sources provided by the perpetrators. The Germans kept good records and the Jews that were whisked away in the shoah hardly had the time to sit down and write their history.

Kassow wrote his book about an exception to this rule. Emanuel Ringelblum was a historian of the Warsaw Ghetto who set up a team of contemporary historians and they all made efforts to chronicle their fate as long as they could. Only when this became impossible, Ringelblum hid their archives and they were sent off to the destruction camps. Part of the archives have been discovered and Kassow's book is based upon this.

Marshall Poe's interview with Kassow spends a lot of time on setting the stage in order to have the clear frame of reference in which Ringelblum and his crew worked. Apart from being a fascinating interiew, this is also a great incentive to read the book.

Here is a charming history podcast that was recommended to me by Julie Davies of the Forgotten Classics podcast. The podcast is called Sparkletack and I have no idea what connection this makes to its subject: the history of San Francisco. (feed) 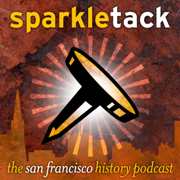 There is a shared characteristic with Forgotten Classics though, as far as I can say after two really nice episodes. Host Richard Miller, a graphic designer by trade, relates the history of San Francisco to us by reading from some of his source material. Thus we have been presented an impression of the Barbary Coast and of the Cocktail Route in San Francisco. The first was taken from accounts describing events in the nineteenth century and the second from a book written in the 1930s The Champaign Days of San Francisco.

Apart from giving an excellent reading, Miller knows to choose his text very well, so that you are immersed into the historic picture of San Francisco. No wonder he calls these podcasts 'time capsules'. Apart from time capsules there are also other type of episodes to be had from Sparkletack. It seems I have only begun to listen.