I used to feel that prehistory were not that interesting. Too little data to go on, too few narratives that can be reconstructed. But with a find such as Ötzi the Iceman, human history of 5000 years ago suddenly bursts to life. In the twenty years that have passed since the find, Ötzi has not stopped telling us new stuff about his life in the Copper Age. 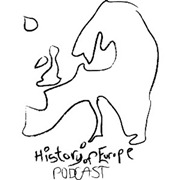 I was reminded to Ötzi by an original amateur podcast The History of Europe Podcast (feed) Christopher Linehan tells the history of Europe, as so many other podcasters do, but his starting point is the earliest of histories. Since the first episodes he has worked his way from the Paleolithic to the Chalcolithic period in the 7th issue. And it is there that Ötzi pops up. With his copper age axe and his whole body and garments preserved in the Alpine ice, he allows Linehan to tell a much more specific story in his podcast.

But if you are new to Ötzi, before listening to Linehan's History of Europe, listen first to Stuff You missed in History Class ( feed) where the basics are told of how Ötzi was found in the Alps between Austria and Italy, however they first thought it was the body of a recently disappeared hiker. Only when the forensic experts had extracted the body fully from the ice it began to dawn this might be a much older individual. 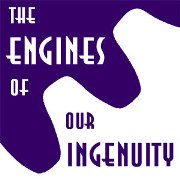 Modern technology has allowed so many ways of analyzing the remains, so that each part of it can be the subject of an entire podcast. Ötzi's shoes for example. The shoes are discussed by Linehan's History of Europe as well as the charming, but short episode of Engines of our ingenuity (feed). The shoes are made of multiple materials and considered extremely fit for the iceman's trek through the mountains. The podcast even goes as far as to claim Ötzi's shoes are even better than many shoes modern people wear. Think about that when you barge around on your crocs.

A huge subject is also Ötzi's medical record: his genetic makeup, his diseases, fractures and wounds as well as the contents of his intestines. Learn more at Medical Discovery News (feed) and Life Technologies (BTR) (feed) Ötzi, for example, was found to have Lime's disease, how that is not what has taken him in.

What actually caused his death, has proven to be one of the conundrums about Ötzi. Did he die of the arrow wound that was inflicted upon him shortly be fore his death (with the arrow head still stuck in his back), or did he die of the frost in the ice that preserved him for 53 centuries? What is certain is that he had been in a fight. It also has become clear he had two good meals with meat and vegetables on the day of his death. He was 46 years old, had brown hair and brown eyes - just like your bloghost...