Upon following the first episodes of The China History Podcast one learns that the maker Laszlo Montgomery was taking his example from Bob Packett's History according to Bob and in addition to doing a regular questions and answers session, also jumps back and forth in time between podcasts. However, I was happy to find out that not just me, but also other listeners are in need of a chronology and they have persuaded Montgomory to turn back to the beginning and take us through the dynasties, step by step. (feed) 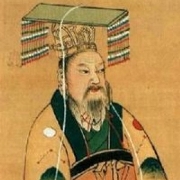 We had, of course, already had the Qin Dynastay, which is credited for being the first to unify China and with which many Chinese histories begin. The first in this dynasty Qin Shi Huang, was the first Chinese emperor. Laszlo did one of his first episodes about this third century BC figure. Yet there is Chinese history way before that. Montgomery went back as far as the traditional Chinese histories go and told about the Xia dynasty. Much of this history is unconfirmed and hence facts are rare and far apart. Even the timing is problematic, but somewhere around 2000 BC this dynasty must have ruled.

The next was the Shang Dynasty. Here is a fascinating podcast to take with you. Not only are there more stories about the dynasty itself to tell, but there is also the riveting point that much of this was until very recently only known from traditional sources. Only in the twentieth century, until as late as 1976, archeological evidence came up that the legendary Shang actually had existed.