UCLA offers a course Jerusalem: The Holy City: A History of Jerusalem from Ancient Canaan to Modern Israel which initially had an audio feed, but that was discarded which left us with just the video feed. 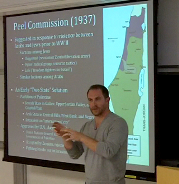 There is a lot wrong with this way the course is offered. The sound of the video is poor, the camera is static so there is not much of a gain in seeing the lecturer (Professor Robert Cargill) and also the view on the screen with his slides is rather poor. What one might gain in seeing a bit of the slides is traded for the general drawbacks of vodcast: the files are big, the download takes a lot of time (and often fails), the material takes a lot of space and many players do not support the format.

Still, all you needed to know about the Middle-East in a 3000 year span nut shell is offered in this course. It shows how Jerusalem takes on huge meaning for everyone involved in spite of its poor military and economic weight. More than anything this course shows how politics and the course of history can be dominated by our constructions of holiness alone.
Posted by Unknown at 06:00 0 comments