The podcast Mormon Stories got me in a pincer movement. A regular reader of the blog (who is a member of the LDS Church) recommended the podcast to me and at the same time I found Brian Dalton's podcast (see my Mr Deity review) who is a former Mormon - a Formon as he calls it. And there I saw that he, Brian Dalton / Mr. Deity was interviewed at Mormon Stories. (feed) 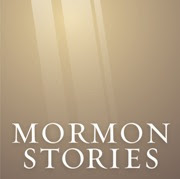 While Mormon Stories is a podcast for and about LDS Church members, it does not shy away from tackling the subject of members leaving that faith. This is how they come to interview Dalton and they give him more than the full stage. Aside the lengthy interview, he also gets to act out his Mr Deity figure, which takes a humorous jab at faith in God in general, but apparently at points at the Mormon faith in particular. I know too little about LDS to be able to identify that.

Dalton has become an atheist and in the interview you get a pretty full picture of how he moved from LDS to his current stance. He describes his developments as well as his convictions and comes out as a balanced secular with whom I can agree on many points of view and without grudges or vile jabs at any faith, not even the Mormons. It makes for a very interesting interview, even if you are no fan of Mr Deity or LDS.
Posted by Unknown at 11:27 0 comments