This review must start with the podcaster, before the podcast: Travis Dow. He is a most prolific podcaster, involved in more than just the two podcasts I listen to and review here: History of Germany and its German version Geschichte der Deutschen. He is also involved in Bohemican, The secret Cabinet, History of Alchemy and Americana für euch. Travis Dow makes more podcasts than Anne is a Man can listen to - is that telling or what? 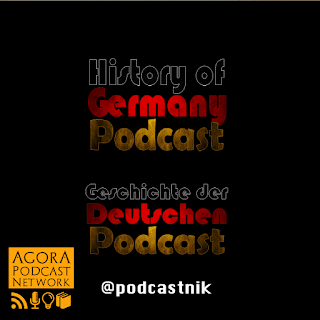 I cannot even keep up with all the installments of History of Germany, but I pick and choose with great excitement from the episodes. Of course I had to listen to the episode about the Frisians - with my Frisian roots (and name!), about the Olle DDR (the GDR) the one about the Reinheitsgebot (a must for the beer purists) and the one that explains why Dutch is not Deutsch (German) although it is the same word - ever wondered? Travis gets you the answer and he gives it both in English (feed) and German (feed). Right now I am engaged in his episodes about the Franks and Karl der Große.

What makes the podcast pay off the most, is that Travis delivers history with the same questions and search for connections and explanations that have me hooked on history in general. His delivery is very conversational, that is, he is not following any apparent script but rather engaging in a natural monologue (or dialogue with his guests) which makes for engaged listening even if it turns into rambling here and there.

Since Travis is an American, I was very curious to try the German version of his podcast expecting he'd be less conversational and free-flowing when not using his mother-tongue, but that is not the case, his German is completely fluent and his German podcast is just as conversational. Hence it is also not a one on one translation. The two feeds follow the same path, but Travis is conscious of talking to a different audience with different general knowledge and different reference points. This I find brilliant.
Posted by Unknown at 20:00 0 comments