In 2007, Krista Tippett made one of the best issues of her program Speaking of Faith. It was the award winning conversation with Fatemeh Keshavarz about Rumi. To our delight, this wonderful program was rebroadcast and republished in the feed. Here is the review I wrote then:

"The Ecstatic Faith of Rumi", is the title of the last issue of Speaking of Faith. Subject is the 13th-century mystic and poet Rumi of whom I had never heard, but who appears to be popular, not only among Muslims, but in recent years also in the West. Krista Tippett speaks about Rumi with Fatemeh Keshavarz professor of Persian and comparative literature at the Washington University. 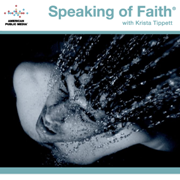 Professor Keshavarz displays an enchanted affection for Rumi, quoting him and referring to him with loving reverence. What leaps out to the unexpecting listener is a type of both mystic and worldly Islam, which is artful, playful, philosophical and mystical at the same moment. Rumi's lines dance like the whirling dervishes, whose performance he is claimed to have invented as well.

Fatemeh Keshavarz: "I think the energy can't go in all directions completely in control and you have to choose because you have one life. You have to spend it wisely. So absolutely, he would say choose, be selective, recognize your own value. At another point he says, 'You are an astrolabe to God, you know, don't use yourself for things that are not worthwhile.'

But I want to linger a little bit on that idea of being scattered because that's a key concept in Sufi thought. And actually it's something that the Buddhists also talk about a lot. And that is our mind just jumps from one thing to the other and, you know, the Sufis call it the onrush of ideas into our minds. And in some ways, if we allow it, it takes us over, you know. You know, what am I going to do about that credit card? You know, how am I going to--what do I do about this student paper, you know, whatever else is that you're concerned with, my family, my kids, my future. So it all invades your life and so in a way you're pulled in all directions. You're scattered. So one of the purposes of his poetry and one of the concepts the Sufis talk about is to collect that scatteredness."

More Speaking of Faith:
The story and God,
The Buddha in the world,
Doubt,
Listening Generously - Rachel Remen, (recommended)
The Sunni-Shia Divide and the future of Islam.