Avi Shlaim on Israel and Palestine - The Economist

It is always good to hear a historian about the Israeli-Palestinian conflict. In this case, The Economist podcast offered a short conversation with Israeli historian Avi Shlaim, who is considered as one of the revisionists among Israeli historians.

Shlaim repeats a position that can be seen as one example of what Henry Kissinger is supposed to have generally stipulated: The Palestinians never miss an opportunity to miss an opportunity. The specific tactical mistake Shlaim has in mind is the Palestinian (and broad Arab) rejection of the 1947 UN division plan. Not only would they have been better off than today or at any time in the future if there is ever going to be a Palestinian state along the pre-1967 borders. He goes on to add that the Jewish state within the 1947 borders would not have been viable.

More from The Economist:
A crisis of authority in Iran,
Comfort with Obama,
Democracy in America - podcast review,
Issues of Race,
The primary system.
Posted by Unknown at 18:00 0 comments

Guests of Eire - History of Ireland

The BBC's Short History of Ireland podcast brings short daily episodes that takes us through the history of Ulster and Eire in the most elegant, informative and even entertaining fashion. 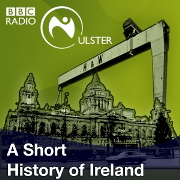 Despite a few thematic jumps and slight shifts back and forth, generally this series is chronological. And so, after weeks it has finished speaking of the period of World War II and has begun to discuss the after-war era, kicking off with all the reconstruction needed after the war. Here, as well as with the war-section, Ulster and Eire have a different history, yet, the two, as close as they are, have their histories intertwined.

As far as WW 2 is concerned, this makes for fascinating and unexpected anecdotes. Most unexpected are those of Eire, which was neutral during the war and carefully maintained its neutrality. Despite that, effectively it stood on the allied side in many aspects, whereas at the same time, it had internal forces drawing towards the Germans. But after all, Eire was relatively far away and yet it was still close enough to have fighting men of both parties wind up on its soil. I was surprised to hear their stories. Both Germans and allied soldiers got a royal treatment in Ireland

The episodes that touch on this issue, as well as those about the Americans in Ulster and about the smuggling between Ulster and Eire and those about German spies and collaborators are simply fantastic and worth to dig up and listen to again. All in all, this is a wonderful podcast to give a daily listen to.