Catholic Stuff You Should Know is a podcast that was recently recommended to me. This came after I looked into and abandoned the Catholic Laboratory Podcast (Cathlab in short). Also The Pope Podcast is a Catholic podcast. What these have in common is that they take on their subject with an explicit Roman Catholic perspective. The issue that comes up is: does this turn up to be about facts or about doctrine? 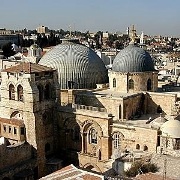 Of course the two are in such a framework naturally intertwined, but when the doctrine part takes over, the facts tend to become stretched. Catholic Stuff You Should Know shows this in their issue about the Holy Sepulcher. The way they tell about this Jerusalem church makes it sound like it is an exclusively Catholic church and since they claim to have been there in actuality why would you check up on this? A peek at Wikipedia about the Holy Sepulcher already points in another direction. I have been to the Church of the Holy Sepulcher myself and I can see this from my own experience: what you run into in this Church is Armenian, Greek, Syriac, Coptic and only in a very limited way Roman Catholic - as opposed to many other famous churches in Israel, such as those in Nazareth, Capernaum and Mount Tabor.

More obvious is a small item about the etymology of Monday. (EDIT: I got this wrong. They discussed Maundy, not Monday) I thought: this is Moon-day and Wikipedia on Monday matches that expectation. However, this apparently is too pagan for the Catholic podcasters and so they propose two Latin, Biblical possibilities: Mandatum and Mendicare. Well, that is taking it very far from what would widely be considered factual and so, the conclusion must be: this podcast is about doctrine. As such, it is an interesting one. Find out about Arius, about the Ethiopian Church, Stylites, Indulgences and more. It is also short (no more than 10 minutes) and presented in a very free conversational style. (feed)

EDIT: As one of the readers pointed out in the comments below (thank God for comments); the issue was Maundy Thursday and where the addition Maundy comes from. Indeed Catholic stuff that I should know. Well maybe not absolutely have to, but it certainly helps to keep my feet out of my mouth.
Posted by Unknown at 06:00 12 comments