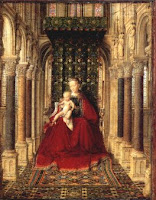 Berkeley's History 5 has finished the second week. It is my intention to report on this podcast on a weekly basis.

Lecture 3: New states and new worlds.
1492 could also have been taken as the starting point for this lecture series. Anderson defines the many importances of this year. The one that stands out is Columbus's landing in the Americas, which opened up for Europe an entire new world of expansion. She argues the discovery would have been a matter of time and proposes a couple of others who could have succeeded, had Columbus failed. The consequence is the conquest of the west, which is made really easy by the microbes.

Lecture 4: A common culture.
Back to the 1450's: Gutenberg developed movable type, in other words, invented the printing press. It is the printing press that allows for the fast spread of knowledge of the new world, so that all European nations take up exploration. In addition, printing allowed for the fast spread of the reformation. So, here is how the whole of Europe takes part in the change. The greatest merit of this lecture is Anderson's explanation of how much the Europeans have in common. Especially the facts she presents about the European Family type is very fascinating. It turns out the Europeans then, built their families more similarly to modern Europeans than we'd expect.

More History 5:
The making of Europe in 1453,
Award for Professor Thomas Laqueur,
From the Renaissance Until Today,
Agricultural revolution first,
The genitals of Christ: Anne asks and then Anderson replies.