Just as the west, China struggles with its secularism and its traditions, Confucianism, ancestor worship, Taoism, Falun Gong, Tibetan Buddhism and its officially recognized religions. It struggles in a very Chinese way, but much of its secularist stance is learned and adapted from the west. This we learn in a very interesting issue of Speaking of Faith. 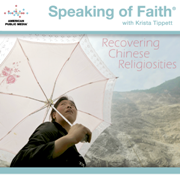 Krista Tippett spoke with the Chinese anthropologist Mayfair Yang director of the East Asia Center at the University of California in Santa Barbara. Yang describes the irony that is going on in China. First of all, this traditionalist and highly spiritual society had shut its doors to the west for a long time, but once the doors spun open, around the humiliating defeats in the Opium Wars, it felt it had to rush in an make up. The wind flowing from Europe was one of 19th century rationalist industrial society and Protestant reformation. This was what should be emulated and in short, anything old, ritualistic and religious became suspect, considered superstition. Not only the communists but also the Chinese Nationalists (Kuomintang) were of this secular line. All traditions became repressed.

However, the mind set allowed just as much the 'liberation' of Tibet - that backward traditional, feudal society, as well as the person cult of Mao and the zealous dedication to the Cultural Revolution. As much as the official line repressed the spiritual mind set it tapped into it. Although today, the Chinese try to come clean, suspicion of 'superstition' is still strong. And never mind how much this is typically Chinese, I want to suggest in many ways the Chinese struggle is deeply similar to the western struggle. It serves to look for the same kind of ironies; how we suspect 'superstitions' and at the same time unwittingly tap into them.

In addition to the program there is the Full interview with Mayfair Yang and a Transcript of Speaking of Faith on China's struggle with secularism and religiosity.

More Speaking of Faith:
Three issues of Speaking of Faith,
Preserving Ojibwe,
The story and God,
Fragility and Humanity,
The Sunni-Shia divide and the future of Islam.
Posted by Unknown at 06:00 0 comments