Conceptual Foundations of International Politics is an old (2007) political science lecture series from Columbia University. It has been reported on already by Dara from DIY Scholar and Baxter Wood. The feed of the course is no longer avaialable under iTunes as reported by Dara, but Saeed Ahmed found an old feed that is still available. Thanks to this, I could also check the series out.

By now I have progressed through to the fifth lecture in the series and I agree with my friends that it is an excellent course. As a matter of fact, all of you who pick up geopolitics oriented lectures from the UChannel podcast frequently, will be supplied with a very useful background to these.

It has been pointed out by Baxter that some fo the lectures are worth seeing because of the visuals. I found a youtube group that apparently, though not obviously ordered, contains video registration of this course.
Posted by Unknown at 19:00 0 comments

Among the wide variety of university lecture series I (try to) follow on podcast are also series from Yale. In the past I have reported about Game Theory, Ancient Greek History and The Hebrew Bible and now I have taken up another one in selected offerings: Introduction to Psychology by Paul Bloom (feed). Note that in the past these courses were not available in feeds. For more information check Open Yale Course Feeds and Huffduffer feed for Yale course on Hebrew Bible by Christina Hayes. 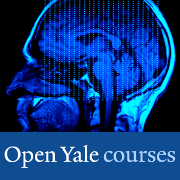 Bloom's series kicks off in a fantastic fashion and even while I have only proceeded onto the fourth lecture, I can already recommend the course heartily. Bloom is a very engaging lecturer who makes his field accessible, interesting and compelling at the same time. Frequently he is even outright entertaining. So far this is clarifying and fun at the same time.

I'd like to pick out the second lecture in which he elegantly takes on the common sense notion that we are a duality of body and mind, or brain and soul if you wish. He jumps ahead to the modern state of affairs where we have learned so much in neuro-science that we have begun to understand how fundamentally physical we are, even our psychological processes. Just as noteworthy is his third lecture in which Bloom picks up Freud, gives a quick entry into his thought and then manages to finish, before the hour is past, to explain why Freud is widely condemned as being unscientific and yet what of his theories continue to influence the field of psychology. This second lecture can be seen on video on YouTube and on Open Culture.

A year ago Volkis Stimme, the German comedy podcast began. The podcast consists of weekly episodes with mock-news items, based on the actual news. It is a funny, sometimes witty, sometimes silly show that cheers me up every Sunday morning when I have to get back to work.

If you subscribe now to Volkis Stimme's feed you will be treated with the Sondersendung that is supposed to be released today, to celebrate one year of the podcast. Apart from the congratulations of friendly podcasters and its audience, I am sure there will be the regular mockery of especially German actualities. With Volkis knack for voice impersonations, we may even have a guest on the show - Angela Merkel perhaps? Or will Reiner Calmund come and take his revenge?

Subscribe and find out. And as one of the faithful listeners, I also wish Volkis Stimme a happy Geburtstag.