After the Cup - Africa past and Present

Africa Past and Present is a richly varied podcast with conversation about all kinds of subjects related to Africa. Specialists are invited on the show to shed their light in their realm of expertise. The podcast is produced at Michigan State University by the historians Peter Alegi and Peter Limb. It is not just about the continent itself, but also about African influence elsewhere, whether by virtue of the African population living abroad or otherwise. (feed) 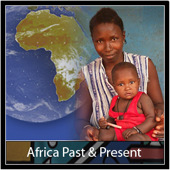 I have occasionally pointed at this podcast in the past and I continuously keep an eye on the feed ready to pick up a subject that connects with my interests. This came up with the latest issue where the meaning of the World Cup for Africa was discussed. The conversation was recorded on the eve of the final of the World Cup 2010 in South-Africa. There is some discussion of football, especially about the Ghana team, but mostly about the feat of organizing the tournament for South-Africa in particular and Africa in general.

The greatest concern, also in other media, is how the huge economic investments will pan out. The podcast mentions Greece as an example and makes a connection between Greece's current financial crisis and its organizing of the Summer Olympics 2004. It is pointed out that the World Cup, though big, is not as huge as the Olympics and it is assumed South-Africa learned from the Greek mistakes. Yet, the financial outcome still has to be figured out, the reputation of South-Africa and even Africa in general, has greatly benefited from the World Cup.