Ever since Professor David Levering Lewis produced the book God's Crucible; Islam and the Making of Europe he is touring the lecture circuit to speak on the subject. At the London School of Economics he appeared nearly a year ago and I reviewed the LSE podcast with the lecture then. Just now, UChannel Podcast published another one at Vanderbilt with the same title, A Counter-Narrative: Islam and the Making of the First Europe , where the audio is much better and the professor is more streamlined with the subject. 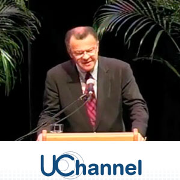 Basically the book and the lecture are about history and offer a different perspective on two battles long, long ago in history: The battles of Tours (732 AD) and Roncevaux (778 AD), which would be merely academic, had these battles not profoundly defined our narrative of European History and Identity and pitted the Christian West in an irreconcilable enmity towards the world of Islam. Roncevaux is the tragedy better known in its retelling in the Song of Roland. In this reconstruction Roland is the tragic hero of pure and uncompromising Christianity. The evil of the Islam is a given and its threat not questioned.

David Levering Lewis paints a whole different picture though. Exemplary is the cohabitation of Christians, Jews and Muslims in Spain before the reconquista, which allowed for a golden age for all. The mentality of Tours and Roncevaux reject that culture however and plunges Europe in a prolonged era of savagery until the Renaissance. It may now be responsible for the similarly unremitting Islamism. The counter-narrative, offers an alternative for our definitions of self and our relationship with the world of Islam. This history shows that the, albeit more complicated and demanding, cohabitation is far more advantageous than the eternal pitted fight. That makes the Song of Roland relevant for today and requires of us to evaluate its defining narrative anew.

Anne is a Man in the week of March 2

Here is a schedule of what you can expect this week on Anne is a Man!

- A counter-narrative about Europe and Islam. Professor David Levering Lewis on UChannel Podcast. The separation and enmity between the worlds of the European West and the world of Islam has hurt both sides more than done good. Whereas the peaceful cohabitation in Spain before the reconquista was profoundly beneficial.

- VPRO's Marathon Interview. Ger Jochems speaks for five hours with G.B.J. Hiltermann the proverbial conservative commentator on geopolitics in the Dutch media during the Cold War. Hiltermann surprises, with among others remarks of admiration for the Soviet system. (Dutch)

- The Islamic Republic of Iran after 30 years, Professor Fred Halliday argues the strength and resilience of the ayatollah revolution on an event at the London School of Economics - LSE Events podcast.

- Anton Kröller the Dutch industrialist who made a fortune of the Great War and the Dutch neutrality and whose wife, Helene Kröller-Müller, got to spend the millions on modern art. Veertien Achttien podcast (Dutch)

- The real war in Gaza; Asher Susser on the UCLA Israel Studies Program. Again, the real war in Gaza was the war between the moderates and the fundamentalists. A slightly more successful attempt at construing events this way than the previous issue at UCLA, by Jacob Dayan.

- The fox and the hedgehog. An exceptional issue within the series From Israelite to Jew, where an approach to Talmud is suggested and a very profound line of thinking in many more fields of experience and thought comes out.

- How the fingers fork, your family lives history and Marlbourough cunningly keeps the alliance together in the latest issue of Historyzine. Also: a review of BBC's In Our Time

- Speaking of which: BBC's In Our Time has touched upon the Jaipur Observatory and upon the poem The Wasteland and there will be a new episode by Thursday. There is at least one review needed.

By Friday, I will hopefully be able to give a projected schedule for the weekend, or otherwise on Monday for next  week.

Subscribe in a reader
Paste the link
http://feeds2.feedburner.com/Anne_Is_A_Man
into the RSS reader of your preference. (What is RSS?  - Help on getting subscription)

I love to get new podcast recommendations. You can let your preferences know by commenting on the blog or sending mail to Anne is a Man at: Anne Frid de Vries (in one word) AT yahoo DOT co DOT uk

Connect with Anne is a Man on:
Facebook,
Twitter,
The Podcast Parlor.
Posted by Unknown at 06:00 0 comments