BBC's In Our Time - always recommended

Here is a quick update about BBC's In Our Time, which I must deliver in order to get a clean slate. Since my latest review we have had three very good programs which I hope you all downloaded and if you haven't listened to it, go ahead and do.

The issue about Suffragism gives insight to the political activism that preceded women getting the vote in Great Britain. About radicals, moderates and those women who opposed. This is not only a fascinating history of recent political developments, also of gender, treatment of women and political prisoners and controversy. Controversial, for example, is the question whether the Great War expedited or delayed the eligibility of women for the vote.

The building of St. Petersburg is more than just a history of Peter the Great's feat to build a whole new city for himself in the Baltic. It is also a story of Russia's struggle for modernity and of autocratic ruler's capacity to shape their empire.

The vacuum of space is one of those scientific In Our Time programs. Every season there are a handful of those and they invariably are the toughest for me to follow. I dare to predict they are the toughest to follow for the whole regular audience of In Our Time. Yet, to the credit of this particular instance it needs to be said it had me glued to the iPod until the end.

More In Our Time:
Brave New World,
Rafael's School of Athens and the depiction of Plato and Aristotle,
The Boxer Rebellion,
The library of Alexandria,
The Waste Land by T.S. Eliot.

Links to this post
Labels: BBC, English, history, In Our Time, podcast, science

I have just begun to make myself acquainted with a podcast that was brought to my attention by a reader: the Mighty Movie Podcast. (You will have to excuse me for not writing the name in persistent capitals, as the makers do) Podcaster and film critic Dan Persons interviews film makers about their work.

I usually go through a couple of episodes before beginning to see the form of some general review, but I was lucky enough to pick up as a first listen such an interesting chapter, I couldn't resist pointing you directly to that, before knowing more broadly about the show. 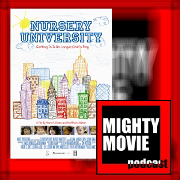 Nursery University is the title of a documentary made by Marc Simon and Matthew Makar about the rat race New York parents get involved in in order to get their toddlers enrolled in nothing but the best day-care centers. While describing how they could get to make the film, Makar and Simon already suggest that also elsewhere in the US this phenomenon is likely to exist and I can vouch it also happens in Israel. So even though they assume their picture describes a New York reality, I think deep down it is universal.

If you imagine the hysteria and sham involved, you come to appreciate all the more the efforts the filmmakers had to go through in order to realize this project. Dan Persons podcast gives a wonderful concise view behind the screens. If the podcast is regularly as good as this one episode, it is a great treasure trove, not necessarily just for film buffs.

Robert Heinlein according to Ran Levi

Every once in a while, עושים היסטוריה! עם רן לוי (Making History with Ran Levi) pays attention to a writer and his work, mostly in the realm of Science Fiction in stead of digging into a subject of the history of science which is Ran Levi's usual subject. These are invariably great episodes.

Among these generally recommended is specifically the recently delivered episode about Robert Heinlein. With great respect, admiration and the usual, typical Israeli tongue in cheek, Ran Levi goes over Heinlein's biography, work and the wild variety of interpretations available. Heinlein is portrayed as a very original figure whose ideas cannot be molded into one commonplace stream or another, yet which stands out as smart, challenging, provocative and eventually accurate.

Apart from all the content of literature and political philosophy, the way Ran Levi deals with Heinlein involves enough science, history and technology to make it neatly fit in with the general subject of the series. Once again, he has shown to be, by far, the most professional Israeli podcaster.

More Making History with Ran Levi:
Diamond Rain and other phenomena,
Blood,
Myths and pseudo-knowledge,
What goes up, must come down,
Douglas Adams.
Posted by Unknown at 06:00 2 comments