The playlist these days

While I have virtually stopped blogging about podcasts, I am still listening. There are a couple of podcasts I keep following and here is a list. 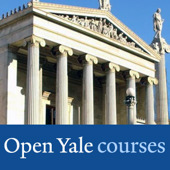 The Early Middle Ages - Yale course. (iTunesU)
I have done this course before, but I was caught by it again. The reason I pick up certain history podcasts is because I want to wrap my mind around something. The point that was brought to my attention first by Europe from its origins is that the Roman Empire did not 'fall' in 476. Even if that was clear to anyone who was aware that it proceeded as the Byzantine Empire, which finally fell in 1453, an additional point is how Western Europe kept on developing at the hand of the Church, not being the Roman Empire, but also, in many ways as a continuation of it in its own way. The overall question being, how much western society can be coherently taken as one culture and as such be regarded as Roman.

A new podcast I have taken up is The History of World War II by Ray Harris. This is an amateur podcast which takes on the vast and unwieldy task of telling the entire history of WW2, which professionals do not begin to tackle. The result is very interesting shedding light on some less familiar parts such as Mussolini's rise in Italy. It pays ample attention to the nuts and bolts of the military campaigns in the war, which have to be to your liking of course. (feed)

Other podcasts I stick with are The China History podcast - which just finished a series about the history of Hong Kong (feed) - and David Crowther's History of England (feed). Needless to say, I also persist in listening to each week's issue of BBC's In Our Time (feed).

Apart from having a writer's block (I feel I am repeating myself on the blog and cannot bring myself to continue repeating), I also find that with the latest upgrade of iTunes, a crucial feature has been removed: the advanced subscribing to podcasts. That seems like a minor change, but I find it has great meaning and implication and first of all renders irrelevant almost all of the feed links I have been posting over the past years - 2000+ posts hurt, ouch!

I would like to revive this blog. I love to write about audio on the web, but I have to find a new way of doing it. Feel free to drop suggestions. In the mean time, I'll be silent, but there will be another guest post by Saeed coming up and maybe I'll give in to a rant about iTunes.
Posted by Unknown at 11:26 2 comments