Here is another guest-post written by Saeed Ahmed:

Monocle is a relatively new magazine (launched 2007) that takes great pride in it's real-paper format, putting tremendous thought into the look, feel and emotional appeal of the visual and tactile aspects of its product. However, don't let this retro-focus fool you. Since 2008, Monocle has been "airing" a around the clock radio schedule. I recently discovered this and after sampling a couple of its program offerings, decided to immerse myself in the Monocle experience for a week, which included listening its podcasts and watching videos posted on the Monocle website. 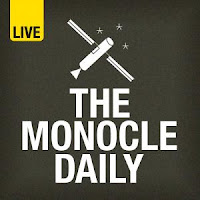 On weekdays, Monocle has five daily hour long news shows which start at 6am (UK time) and end at around midnight. The Monocle staff are prompt in posting the podcasts (much faster than news podcasts from the BBC it seemed to me). Each of these has news headlines at the start and in the middle of the show. In between, there are pre-recorded reports from correspondents, live interviews, and a review of newspapers from different regions of the world, usually with a studio guest. Each of the five shows (Globalist, Midori House, Briefing, Globalist Asia, and Monocle Daily) has its own flavor, and what I found remarkable was the very small amount of redundancy. I didn't listen to every show every day, but when I did listen to two or three of these in a row, generally only one or two stories were repeated at the most.

In addition to the weekday news shows, Monocle has weekly shows on that cover design, urban living, food, movies, books and magazines (yes, magazines, in a show called the "Stack" in which they discuss developments in in-print magazines because this is something they consider important and enduring).

Monocle is also somehow able to maintain a correspondents in several countries (all of whom are good on air), to find interesting studio guests, and to maintain good relationships with other news outlets whose representatives call in regularly and provide reports. Perhaps my favorite thing is the Monocle radio personalities, who come from many different places including the UK, US, Canada, Australia and Finland. Unlike the dry presentation of Al Jazeera, BBC or the US networks, the Monocle broadcasters inject a quite healthy dose of humor in between the news headlines, features and interviews.

I don’t know how Monocle does maintains this prolific output and very high standard in print and broadcast media with what must be a small staff and budget (compared to BBC, CBC, ABC RadioNational, RTE and US networks). It is amazing! I hope they can keep it up.

After my week long immersion, I felt like I had been on a vicarious vacation of sorts, and made new friends. Give it a try, and perhaps you will feel the same way about Tyler Brule, Andrew Tuck, Emma Nelson, Barney Burnham, Markus Hippi, Aisha Speirs, Fiona Wilson and the rest.

You can check out Monocle’s Wikipedia page or read an article about it (The Independent - Monocle, the media project I have always wanted to do). Brule also has his own page, and enough of an internet presence that someone generated a somewhat tongue and cheek fan site.

If I could give feedback to Monocle, I would suggest four things:
1) include some information about it’s radio personalities on its website,
2) provide some links to features that come up in it’s shows,
3) during the news shows perhaps mention some of the videos that are posted on it’s website so that people know to look at these and enrich their experience, and
4) provide the podcast RSS feeds (rather than just i-tune links). This last mentioned one can be a bit irritating to those who don’t use i-tunes. However, there is a technical way to retrieve the RSS feed from the i-tunes site, which can be accessed here (after you go to each of the Monocle show pages and click on “subscribe in iTunes”):