As I already wrote in my post about Ancient History podcasts, I am always on the lookout for new podcast episodes that deal with the Indus Valley Civilization. Little is known about this civ and nothing beats a good mystery, but there is more than just this vague general curiosity.

I was first alerted to the Indus Valley Civ (IVC) by an old history podcast David Kalivas World History podcast, that dates from 2005 and podfaded between 2007 and 2010. David Kalivas not only pointed out what makes the Indus Valley Civ so fascinating in itself: its not yet deciphered script, its amazing stretch (far more vast that other civs), its uncommon social structure (very egalitarian possibly?), and not least of all: its disappearance. Nothing seems to be left from it. What we find nowadays in India and Pakistan are the prolonged product of the Aryans that moved into the IVC's sphere and who apparently replaced it completely. Enough titillating angles to explore in a podcast, but Kalivas taught us more. 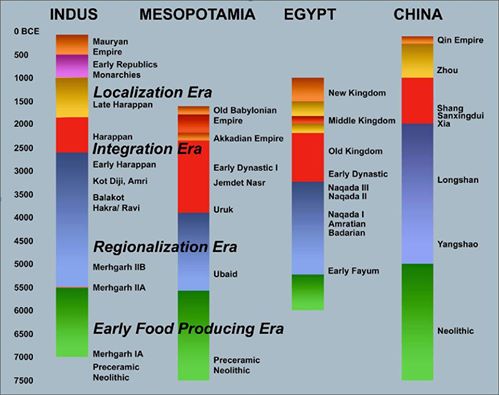 Kalivas made a general point about how we deal with Ancient History and its civs - we generally treat them as isolated entries, but he postulated that it is far more likely that the civs interacted intensively and heavily influenced one another. It was this proposition that has inspired me since and whenever I am looking into ancient history, I am looking for those indications of communication, exchange and influence from the other civs. This influence supposedly crosses the boundaries of geography, but also of time; civs are learning and copying from other civs that they come in contact with and from civs that have come before them and from which they inherit in one way or another.

Since the famous seals from the IVC were found as far away as Mesopotamia, Egypt and the Arabian Penninsula, we know there was contact, but since we know so little, we cannot identify what the recipients got from IVC. Similarly, we know that Aryans came after the IVC and we know them a lot better from the writings that are the basis of Hindu culture today, but what remains of the IVC in the Indus world of today? Did the Aryans learn some of their stuff from IVC, or copied it, or if not that, as they were driving the old people out, did they push them into south India and give us the Dravidian languages? A lot of possibilities, but little concrete evidence. Recently I found two more podcast episodes with an angle on the IVC. The first was an issue of The Maritime History podcast (feed): Harappa and the Erythraean Sea. The perspective of this podcast as the title indicates, is to relate sea-faring in history. This particular episode is to discuss the sea-faring in the Arabian sea in Ancient Times. What we learn is that this early in history (3rd milennium BCE), people managed to exploit the monsoon winds and their regular cycle. We also learn that this can be understood from Egyptian and Babylonian sources. The sources sum up the various products that can be had in the various ports on the opposite ends of the monsoon region, but also detailed pointers from sailors how and when the monsoon wind can be used to sail to the other side and how the coast can be recognized and should be navigated. The podcasts proceeds to describe what we already knew about the IVC, when and where it blossomed and that it traded with Egypt and Mesopotamia, probably through middle men. The archaeology of this civ is relatively new, and for example there are no finds of ships or shipping material, but since the archaeology is so new, we may be getting significant new insights in the near future. And so, the podcast follows the assumption that we already adopted, that there was intensive trade, yet it emphasizes there is still not that much evidence. Consequently, with the likely exchange still not entirely proven, it is still too early to suggest ideas of how the IVC got influenced and how it influenced others. So not many new ideas but a valuable addition on the technicalities of seafaring in those days in that area. 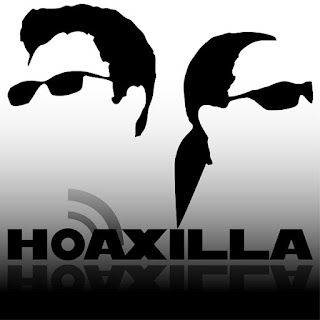 The second was an issue in the German podcast Hoaxilla - Der skeptische Podcast aus Hamburg (feed): Mohenjo Daro. This podcast digs into the question of how the IVC could so suddenly disappear without much trace. And the reason for this podcast, that is for skeptics and not necessarily for history lovers, to take on the subject, is because they try to debunk the claim that Mohenjo Daro was wiped out by a prehistoric atomic bomb. The debunking of such a preposterous theory is obviously very easy and harrdly noteworthy if the podcast had stopped there, but the real interesting part is where they discuss what would be a more convincing theory to explain the rather rapid decline of the IVC (not just in the Mohenjo Daro area but also at Harappa and elsewhere). Here we are presented with some good possible answers to this very central question. The best contribution in my opinion is that not only does the podcast point out that more reasonable theories are better founded in the available data and therefore more convincing, but they also make the truly scientific point that in history circles is less often brought up: what makes a theory a good theory is that it offers more explanation embedded in more of the available data than what competing or previous theories did. Not necessarily because it will more likely turn out to be true, but it is more interesting and has more propelling power for the study in the field.