Shrink Rap Radio, the psychology podcast, has published two more episodes very shortly one after the other. Show #129 is along the traditional style of the interview podcast and show #130 is in the new live format, that is still under development, as you can sense with these episodes.

#129 - Process Work
Dr. Dave is excellent again as an interviewer. He is wonderfully agile at making the podcast sound like a natural conversation, yet at the same time carefully guiding it around so that we naturally get introduced into the subject. In this case it is the interviewed Julia Diamond and her specialty 'Process Work' which I have some to understand as a set of techniques that allow to interpret dreams, conduct therapy and generally enhance awareness. The techniques rely heavily on styles of communications, not just verbal, also non verbal. It reminds Dr. Dave of Dream Work and Gestalt Therapy - similarities that are acknowledged by ms. Diamond.

#130 - Live #5
In the live show we have a conversation between Dr. Dave, Jerry Trumbule and Douglas Davis. On of the most interesting subjects that comes up is about virtual realities such as Second Life. A listener asks from the chat why it is that in spite of the unlimited possibilities to play out fantasy, Second Life turns out to be largely a remake of reality, with sex, violence and capitalism. Far from giving a definitive answer, the show embarks on an fascinating exchange of thoughts.

From the Renaissance Until Today

A large portion of the podcasts I blog about (and listen to) are history podcasts. It bothers me a little bit that the blog gives a relative lot of attention to history programs on the BBC and the VPRO (In Our Time and OVT) and much less to great historical lecture series such as handed out by Stanford or Berkeley. The latter are just as good, if not better, but the former give a rounded chapter every week that can easily be blogged about, whereas the latter get me hooked on more than ten or even more than thirty hours of lecturing before I sum it up in a post. 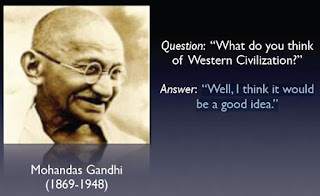 I'd like to change that and begin with one of the very best, if not the best series around: Berkeley's History 5. This lecture series is repeated every semester, that is, twice yearly, and takes the listener through the history of the European Civilization from 1453 to 1989. Mostly the lectures are done by Professor Thomas Laqueur, but in the spring of 2007 he was replaced by Margaret Lavinia Anderson, who did a great job just the same.

In the latest series (and likely again in the spring of 2008), Laqueur starts with a cheeky remark by Gandhi. When he was asked what he thought of Western Civilization, he is supposed to have answered: “Well, I think it would be a good idea.” Notwithstanding the profound truth to this response, it can't be denied that a relative backwater of world history up until the Middle Ages, proceeded to dominate the world as a civilization and it is very worthwhile to follow that process step by step and thus acquire a better understanding of our world and ourselves today.

For example: Why would I blog at all? Why on Google's Blogger? Why in English? I could have been writing a book for a Dutch or an Israeli publisher and the language could have been Russian or Arabic. Summing the course up is nearly impossible, so I thought it might be a good idea when the course is repeated (probably immediately in January 2008), tell about it in weekly installments, like I do with In Our Time and OVT.