Albert Camus - In Our Time 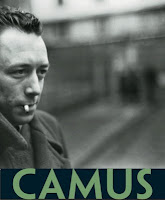 Last Wednesday's In Our Time paid attention to the French writer Albert Camus. When I was younger, he was my favorite writer, no competition. Later I grew a little tired of him. He did not write that much fiction and his philosophical work did not connect with me in the end.

As I have read him so carefully in addition to a lot of works about him, little of what I learned in the podcast was really new to me, but some did put more clearly what I had found. There was even a statement I do not agree with - an evaluation of Camus' position in the Algerian war. So be it, what remains the most interesting, I think, is his fictional work, notably the three novels: L'etranger, La peste and La chute. (The Stranger, The Plague and The Fall)

In Our Time's guests noted, as I did, how Camus' philosophy develops and how these three works have quite a different morality about the individual and his life in relation with others and society. The first work, The Stranger, places the most emphasis on personal happiness and no one nor society should or can stop the individual. The Plague, allows for personal responsibility regarding the group and praises the personal commitment to serve the greater good. The Fall returns to the personal level, but does so by focusing on guilt, to the extreme. For me, these novels remain great and the development is neither bothering nor irrelevant.

Previously on In Our Time:
The Nicene Creed,
Four humor medicine,
The Sassanian Empire,
Mutations,
The Fibonacci Sequence.