Here is a guest-post written by Saeed Ahmed:

Jean Jacques Rousseau “was a charlatan,” a “moral leach,” who “consciously set out to tickle the fancy of the cultural elite in France.”  Hegel “used technical terminology but wasn’t sure what he meant”; “he thought that the way to greatness was through obfuscation.”   “Nobody invented jargon with the viciousness and vengeance of Kant.”
Containing such declarations, it is not surprising that Ronald Nash’s course on Modern Philosophy gets mixed reviews on itunes. 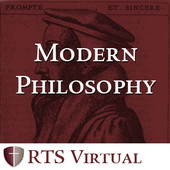 https://itunes.apple.com/us/itunes-u/modern-philosophy/id412910038
Nash (who died in 2006) was an unapologetic Christian apologetic.  His lectures are full of attacks on moral relativism, modernism, post-modernism, enlightenment thinking, and just about anything that does not conform to his absolute, foundational belief in the Christian God.
When it comes to worldview, there is virtually nothing that I find appealing in Dr. Nash’s ideas.  Nevertheless I found his course compelling at 3 levels.
First, he has a surprisingly engaging style; he is not bashful, neutral or balanced.   You know exactly where he is coming from.  His is a full frontal assault on virtual all liberal ideas.  This is strangely refreshing and a change from the nuanced and “balanced” presentations in many lecture courses.  Agree with him or not, he will capture your attention.  His view is a full, undiluted measure of unabashed fundamentalist thought. There are no hidden levers; it’s all visible.
Second, his summaries of philosophers, while reductionist, are quite pithy and at least to my non-professional view, accurate enough to be good introductions.   His basic approach is often something like “this guy was an idiot, but here are the three points he made” and then he lists them very systematically.  For Kant he summarizes: “Concepts without percepts are empty; Percepts without concepts are blind.”  Further, “Kant integrated rationalism and empiricism…rationalism entered Kant’s system because it encompassed the apriori set of categories with which experience was worked upon “; “With the categories, our minds organize percepts in ways that produce knowledge.”  Kant put “human mind at the center”.  “The reason we are conscious of space and time is not just because we apprehend something out there, but because our minds contribute notions of space and time to what we see.”  “There are 12 apriori categories (such as unity, equality, and causation) that allow the mind to organize and relate ideas.” “Laws of nature are in a way a product of the knowing mind.” “We believe x causes y because our minds force us think in this way.”  “We are never conscious of raw percepts; the moment we become conscious, of a raw percept, it has already been acted upon by the knowing mind; it has been given a structure, organization and a set of relationships.” “We cannot have knowledge of what we cannot perceive, thus we cannot know knowledge of our self” (the unifying transcendental self).
Category (apriori) -> Concept (direct object of human awareness) -> unified coherent field (transcendental unity of apperception).
Not bad.  I am not a professional philosopher, and I would be very curious to know what people who really know the subject well think of Nash’s summaries.
Third, it is kind of fun to listen to someone who is confident enough to unabashedly bash some of the greatest minds of the last few thousand years.   Wrong or right (and usually wrong, I would submit), this is just plain fun to listen to at times.
If Nash leaves a bad taste in your mouth, and a ringing in your ears, I recommend four  antidotes:  1) Peter Milican’s general philosophy introduction (available in audio and video from Oxford), 2) Mythology by Gail Lavender, 3) episode 328 of Shrink Rap radio featuring an interview with the extremely erudite Dutch Jungian Analyst Robert Bosnak and 4)  and Buddhist Psychology by Eleanor Rosch.
Unlike Nash’s survey course, Dr. Milican’s is much more balanced and accurate.
http://www.philosophy.ox.ac.uk/podcasts/general_philosophy

In Lavender’s course, I particularly direct you to the lecture on psychological theories of mythology, in which she mentions the dictum “dreams are the myths of the individual; myths are the dreams of the race”, then goes on to explain this using concepts developed by Freud and Jung.
https://itunes.apple.com/us/itunes-u/mythology/id497995501

In the Shrink Rap podcast (#328), Bosnak discusses the astonishing Red Book of Carl Jung (that was published in 2009 for the first time) and in a very short time.   He mentions a plausible hypothesis about why religious fundamentalism is so prevalent these days.
http://www.shrinkrapradio.com/2012/11/29/328-the-red-book-and-cycles-of-change-with-jungian-analyst-robert-bosnak/

In the Buddhist Psychology course, Rosch demonstrates how in many ways, she is the polar opposite of Nash.  Her style is generous, open, non-judgmental, liberal, and compassionate.  She has a very deep knowledge of Buddhist philosophy and modern psychology, so is able to discuss the former, and place the latter in its context, and vice versa.   I would recommend starting this course from the beginning, but if time is limited, then skip ahead and listen first to the third lecture, where a specific form of meditation is introduced.  I have been doing this, and have noticed changes in me after only a few days.
https://itunes.apple.com/us/itunes-u/psychology-107-001-fall-2010/id391538994

These courses complement each other.  Listening to lectures from all contemporaneously really blows one’s mind due to the sheer breadth of material that creates conflicts and tensions in one’s understanding and perspectives.